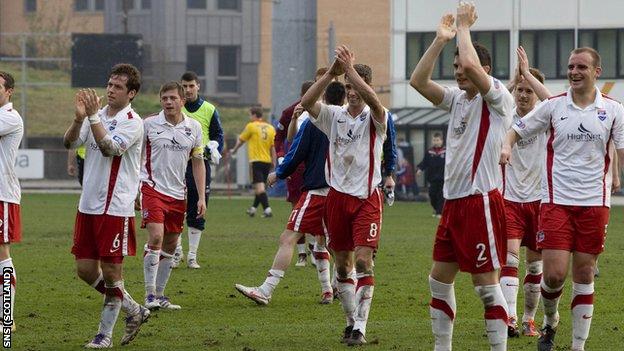 Ross County have been crowned First Division champions after nearest rivals Dundee were held by Queen of the South.

And the former Highland League side, who were admitted to the senior ranks in 1994, are looking forward to their Scottish Premier League debut.

"To win the championship with five games remaining, there's not many teams that can say that," manager Derek Adams told BBC Radio Scotland.

"It's been an excellent effort from my players. They have been outstanding."

The Dingwall team, who reached the 2010 Scottish Cup final - where they lost to Dundee United, have plans in place to make their Victoria Park stadium SPL-compliant.

And they have already received permission to groundshare with Inverness Caledonian Thistle in the event that the work is not completed in time.

County supporters will have the chance to congratulate their team when they visit Ayr United on Wednesday.

"It's taken a bit of pressure off for our visit to Ayr and I'm sure our fans will be in a party mood," added Adams, who watched Queens snatch a late goal in a 1-1 draw at Dens Park.

"My job is to go on and do my job like I always have and we want to finish the season as strongly as we can.

"County have progressed from the Highland League to the SPL and are the first team to do that.

"To win the First Division with five games remaining; there's not many teams who can say that."

"They've all played their part throughout the season and the journey we've been on has been magnificent.

"Hard work beats a lot of things and when you've got a group of players, a manager and a board of directors all together: it's a unique football club."

Promotion to Scotland's top flight means County fans can look forward to a derby with Inverness CT next season.

"You can't beat local derbies," said Adams. "It's something we'll cherish and look forward to."