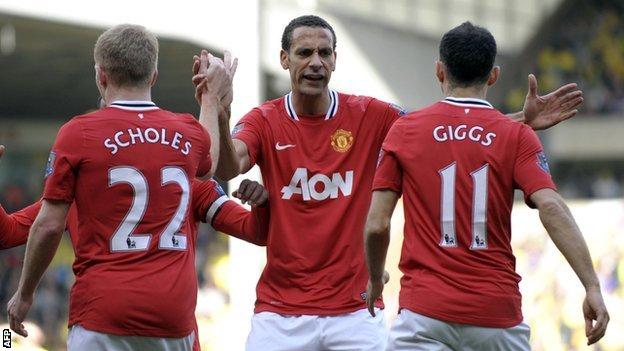 Manchester United and England defender Rio Ferdinand says his focus is on finishing his career on a high as he nears a decade at Old Trafford.

Ferdinand, 33, admits that should United secure another Premier League title this year, it could be his last.

"You think to yourself this could be your last one, or two," he told BBC Radio Manchester.

"This could be my last one. I want to win something. I want to go out on a high note."

He added: "I don't think it would be good to finish your career on a loss. Losses now do my head in, thinking you might not be able to rectify it the season after because you retire or leave."

Ferdinand moved to Manchester United on 22 July 2002 from Leeds United for a £30m transfer fee which was a then British transfer record.

The then 23-year-old said he wanted to win silverware at his new club. Since joining, he has collected a Champions League winners medal, five Premier League titles, a Club World Cup and two Carling Cups.

His Premier League medals came in 2003, 2007, 2008, 2009 and 2011. United are currently eight points clear of second-placed Manchester City with both teams having six games remaining apiece this season.

When asked if he would be satisfied with a sixth domestic title in 10 years, Ferdinand replied: "No, because I still think about the titles we should've won.

"But I've had a great time here. I love this club. My association with the club will live forever with me.

"I've got great memories to take away from here when I eventually hang my boots up, but at the moment I'm really enjoying my football.

"The manager said to me the other day, not many players get to play for the same club for 10 years anymore. To do it at a club like Manchester United that are fighting for league titles and other trophies, it's good."

Ferdinand denied that he is considering retiring though, saying: "Oh no, I'm trying to play as long as I can.

"I've got another year after this (on my contract) and hopefully I can do another 10!"