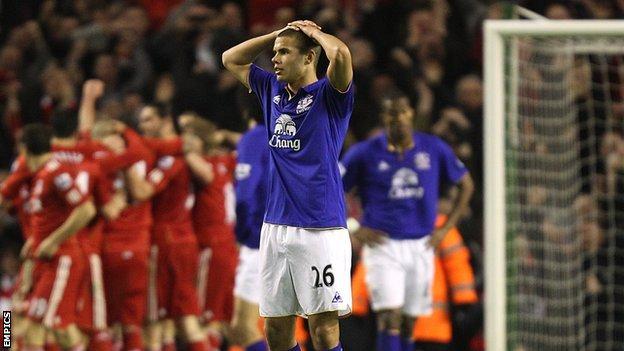 Everton manager David Moyes has advised midfielder Jack Rodwell to forget Euro 2012 and concentrate on getting fully fit for next season.

The 21-year-old, who has won two caps for England, has suffered a new grade one hamstring tear in training.

"I would advise him to concentrate on next season," said Moyes.

"Jack has probably missed six months with hamstring injuries, so we have to get him working on whatever work programme they recommend him to do."

Rodwell played the final two games of Fabio Capello's England reign in November and seemed to be in line for a place in England's squad for Poland and Ukraine or the Great Britain Olympic Games team, but has been hit by a succession of hamstring problems.

Moyes added: "I think it would be hard for Jack [to represent England]. He would have to get back playing regularly."

Rodwell has played just five times in five months and Everton plan to send him to see German specialist Hans Muller-Wohlfahrt for treatment.

Moyes said: "He trained Saturday morning and felt his hamstring again. He had a scan. It's a grade one [tear] which is small. We are trying to send him to Germany for treatment.

"Dr Muller-Wohlfahrt is away this week and because he is the Bayern Munich doctor, he has a very big week next week because of their Champions League semi-final. So trying to get hold of him will be the hardest thing, certainly in the short term."