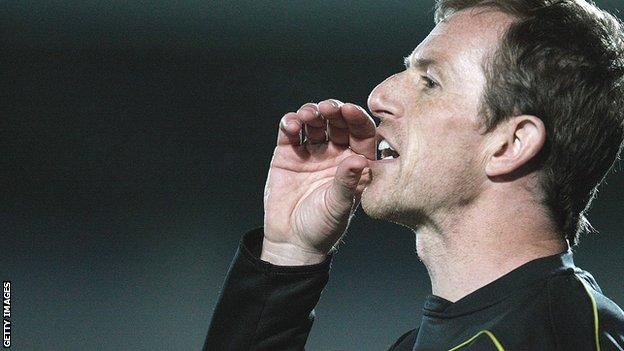 Caretaker manager Gary Rowett looks set to stay in charge at Burton Albion until the end of the season.

Rowett has guided the Brewers to League Two safety after taking over from Paul Peschisolido in March.

But Burton chairman Ben Robinson has refused to confirm whether Rowett will be given the job on a permanent basis.

He told BBC Radio Derby: "We will continue to talk. When everything is sorted and resolved then obviously we'll make a statement."

Peschisolido was sacked on the back of six consecutive defeats and a winless run that stretched back to Boxing Day.

Former assistant manager Rowett lost his first two matches in charge, but is unbeaten in the last four games, taking eight points from a possible 12.

"Following the Torquay game the fans saw a different response from the players and a lot more effort," said Robinson.

"We now know that we'll be playing League Two football next season."

Meanwhile, Rowett has admitted he wants the job permanently.

"Although people were saying we weren't going to get relegated, until it was certain we couldn't take the risk," added Robinson.

"The position is that Gary remains in charge while we continue to talk and look at the bigger picture."