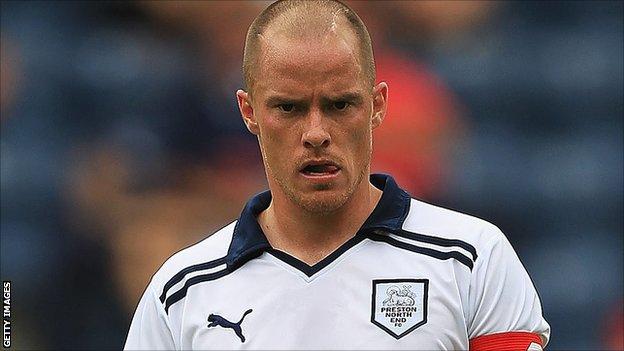 Iain Hume has rubbished claims that he wants to leave Preston North End and has said he intends to see out the remaining two years of his contract.

"I'm playing football and scoring goals. That's why I came to Preston.

"You never say never because you never know what's going to happen with the club and what people's opinions are."

Hume continued: "If anything does come up, it's up to the club at the end of the day, but I'm not pushing for anything. I'm playing football and I'm enjoying it."

The former Tranmere and Leicester man has scored 22 goals in 59 appearances for the Lilywhites since moving to Deepdale from Barnsley in September 2010.

With the problems over the last couple of months and to see it all coming together, the manager's obviously doing something right

Hume netted his 10th goal of the season in Preston's 1-1 draw at Stevenage on Monday, a result that took Graham Westley's side seven points clear of the League One relegation zone with four matches left to play.

The club have been in the headlines for the wrong reasons in recent weeks, with Westley accusing four members of his squad of leaking team news and tactics to the opposition before a match at Sheffield Wednesday.

However, Hume believes the team have shown in their draws against Stevenage and MK Dons during the Easter weekend that they are now all pulling together in the right direction.

"The work ethic from everyone has been brilliant," he added. "If we'd have come away with four or six points from the last two games, you wouldn't have been surprised.

"Unfortunately we've come away with two but the positive that we have to take from those games is that we have looked like a team.

"With the problems that the club's had over the last couple of months and to see it all coming together, the manager's obviously doing something right."

A number of injury problems restricted the 26-year-old, who signed a one-year deal after leaving Norwich City at the start of the season, to just 14 appearances for the club.