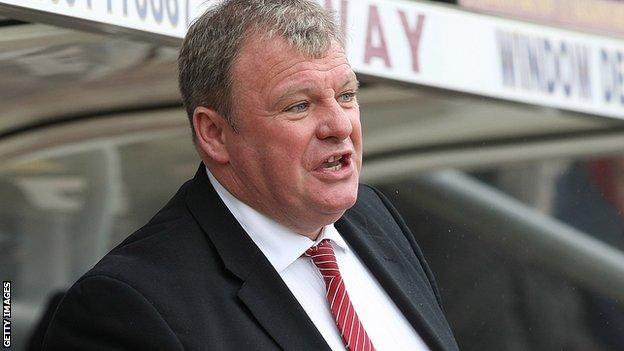 Evans left Crawley Town for the Millers on Monday and chairman Tony Stewart has already indicated he will support the new manager financially.

"The chairman is backing me and we've already said we're going to go high profile in the summer," he told BBC Radio Sheffield.

"This is a Championship club but it's in League Two."

He added: "It's fair to say that the new stadium means I'm going to get more backing than I perhaps would."

Rotherham move to their new 12,000 capacity home, the New York Stadium in the summer.

Evans, who led Crawley to promotion from Blue Square Bet Premier last season and left the club fourth in League Two, believes he has joined the Millers at an exciting time.

"The Rotherham fans are loud and I can picture them in our new stadium and that is going to help us attract new players," he continued.

"The chairman has said he demands we show progress and I think we need to create a culture that's all about Rotherham United. If no-one likes us then we won't care. That's the attitude that the best managers bring to their clubs.

"There's a fantastic new stadium, superb training facilities and passionate staff and the fans are going to be excited because there's going to be some great signings."

During his time with Crawley, Evans gained a reputation for spending large amounts of money but the former Boston manager defended his record at the Broadfield Stadium.

"People from the outside knocked it but Crawley Town does not give the manager the kind of money people think," he added.

"We had two amazing FA Cup runs there and we sold players like Tyronne Barnett and Matt Tubbs for a large profit.

"The board here will do the same as what the guys did at Crawley. They want me to recruit players for £150,000 who are worth £1m and that's what I'm going to look to do," he concluded.