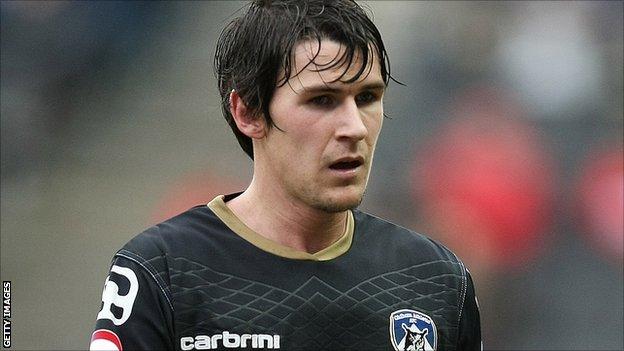 Kieran Lee believes Oldham's game at Wycombe on Saturday will be crucial in the club's battle against relegation.

A win for Paul Dickov's men will almost certainly guarantee survival, while defeat will drag them to within three points of the League One drop zone.

"It's a massive game for the club," Lee, 23, told BBC Radio Manchester.

"It's a six-pointer really because we're down there now and we're fighting for our lives, but we're going there believing we can win."

Oldham's run of five straight defeats, including 488 minutes without a goal, has seen the Latics drop to 18th in the table.

"Our recent form just hasn't been good enough," said Lee, who began his career as a trainee at Manchester United. "I can't remember the last time we scored, never mind the last time we won.

"Things aren't going well for us at the minute but we've got to keep believing and stick together."

Meanwhile, midfielder Tom Adeyemi has returned to Norwich after reaching the end of his loan spell at Boundary Park.

The 20-year-old made 45 appearances for the Latics, scoring three goals.