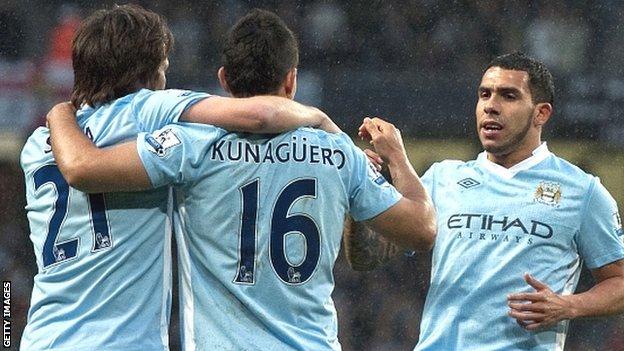 Manchester City boss Roberto Mancini says his side cannot win the Premier League title despite narrowing the gap between themselves and leaders Manchester United to five points.

City beat West Brom 4-0 on Wednesday, as United lost 1-0 at Wigan, to revive the former's title hopes with five games to go this season.

"It is finished," said Mancini. "Five points is too much.

"United have got fantastic spirit. We don't have this spirit."

In his programme notes for Wednesday's match - which City won convincingly thanks to two goals from Sergio Aguero and one each from Carlos Tevez and David Silva - Mancini had suggested that "everything can happen".

The Italian denied he was attempting to play mind games in the aftermath of the win at Etihad Stadium and added that he was focused on ensuring his side ended the campaign positively.

"I think it is important for us to finish the season well," said Mancini, whose side face United at home on 30 April. "This is our best season for 50 years and I am proud of the players."

The 47-year-old added that he thought United were actually playing Wigan on Thursday.

"Only at the end of game did I realise they played tonight," he said.

The win over West Brom was an impressive return to form for City following Sunday's limp 1-0 loss at Arsenal, which seemed to have ended their title hopes.

Tevez scored his first goal in 11 months in his first start since 21 September last year and Mancini said: "I'm happy for [Tevez] and his performance. He is not ready to play one full game but he played 60 minutes and he can improve in the last five games.

"It was an important win because I think West Brom are a good team with a good manager."

Mancini said it would surprise him if United lost to Villa, but admitted: "I don't know. Football is very strange. When you think one thing then the opposite happens."

Meanwhile City have been fined 30,000 euros (£24,740) by UEFA for returning to the field a minute late for second half of their Europa League last 16 first leg with Sporting Lisbon last month.

The fine is more than the 20,000 euros (£16,700) FC Porto received after its fans aimed racist abuse at Manchester City players during a Europa League match in February. Mario Balotelli and Yaya Toure, who are both black, reported hearing abusive chants.

A UEFA spokesman confirmed on Wednesday they had informed City of the punishment. Roberto Mancini's side have three days to appeal against the fine.