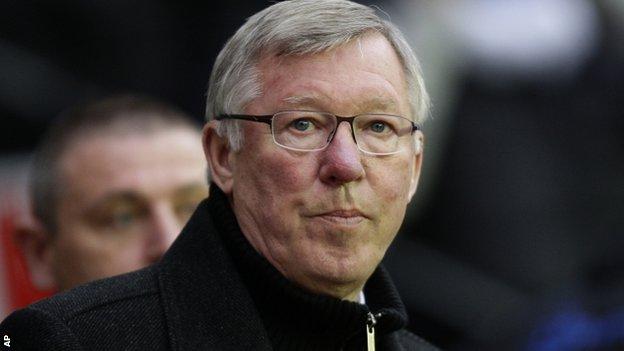 Sir Alex Ferguson admitted his Manchester United side did not deserve anything from a shock defeat at Wigan.

United had a strong penalty appeal against Maynor Figueroa turned down, while Shaun Maloney's goal came from a corner that was incorrectly given.

"Referee Phil Dowd had a disappointing night, he never got to grips with it," said the United manager.

"That doesn't subtract from the fact we were poor. We only had one shot on target and were second to every ball."

United went into the match on the back of an eight-game winning streak which had seen them move eight points clear of rivals Manchester City.

But Wigan were on top from the kick-off, with United struggling to win possession and fortunate not to fall behind before the break when Victor Moses' header was chalked off for a foul on goalkeeper David de Gea.

Wigan eventually went ahead when they were awarded a corner despite the ball clearly coming off Latics winger Jean Beausejour.

Maloney then exchanged a short corner with Beasejour before curling a fine 20-yard shot into the top corner.

Ferguson, who left Paul Scholes out of the match, said: "We didn't start well at all. Wigan pressed the ball well, and their system is hard to play against.

"[Figueroa] did handle it, and the thing is that if he'd been close to the ball then you can say that you won't get those, but he was at least 15 yards away. It's a clear penalty.

"And their goal was clearly a goal-kick, not a corner.

"We got a break on Sunday [against QPR]. You say the big clubs get the decisions, but we didn't get anything."

With a five-point lead, United can still lose the Manchester derby at Etihad Stadium on 30 April and secure their 20th league title.

But Ferguson still expects both clubs to drop points in the remainder of the run in.

He said: "You get a game like that every now and again. We have been on a run but the job isn't done.

"You wish the lead was better but, considering where we were a few months ago, you have to take it.

"I said both teams would drop points and you are always going to drop some."