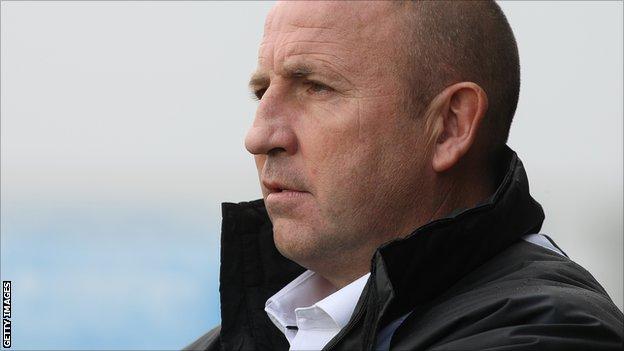 Rochdale manager John Coleman has said he will accept responsibility if the club are relegated to League Two.

Coleman left Accrington, where he had been manager for 13 years, in January to replace Steve Eyre but has won only three of his 15 matches in charge.

Tuesday's 5-2 defeat to Sheffield United means Rochdale will go down if they fail to beat Exeter on Saturday.

"We're not down yet, but if we go down, it will be my team that goes down," he told BBC Radio Manchester.

Rochdale are bottom of League One and 11 points from safety with four matches left to play.

Coleman's side could not halt the Blades' charge towards automatic promotion, conceding another five goals as their winless run stretched to five matches.

"They went through in injury time and poked a ball straight at our goalkeeper," said the 49-year-old. "That was their sixth shot on target. The other five, they scored.

"Over the 90 minutes, we gave as good as we got, but we can't concede goals the way we did."