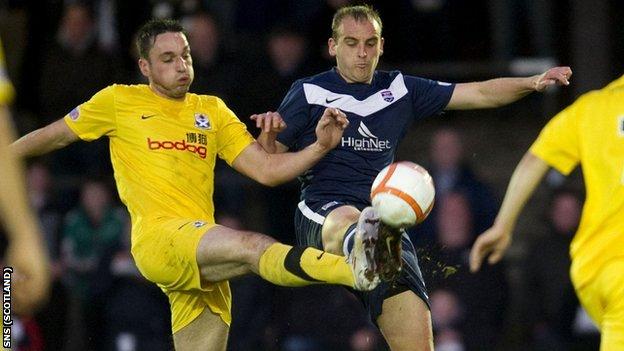 But County took the lead when Michael Gardyne took advantage of a defensive mix-up to fire home.

Dundee's draw with Queen of the South on Tuesday confirmed County as champions, the Dingwall side earning promotion to the Scottish Premier League.

But it was second-bottom Ayr who looked the more likelier side in the first half with Liam Tomsett denied by goalkeeper Michael Fraser after the efforts by McGowan and Campbell.

The deadlock was broken seconds after the interval as Ayr failed to clear Richard Brittain's cross and Gardyne was presented with a shooting chance that he converted.

Eddie Malone's cross hit the County crossbar before Trouten burrowed through the visiting defence to level with a well-placed shot.

County's Iain Vigurs had struck the post before the equaliser and the visitors regained the lead on 67 minutes when McMenamin nodded home Paul Lawson's cross.

Ayr probed in search of a second equaliser but substitute Morrow blasted a shot into the roof of the net to leave the hosts a point clear of bottom club Queens and two points off Raith Rovers.