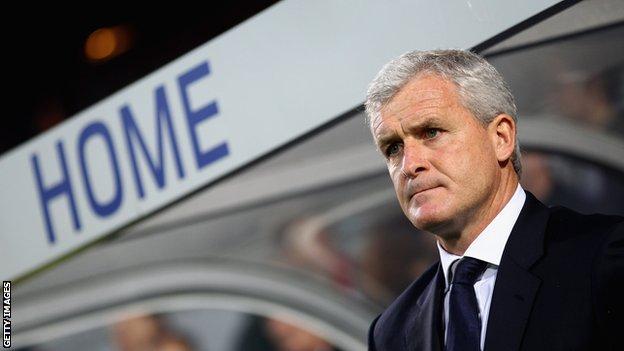 QPR manager Mark Hughes is convinced his side can stay up if they carry on their winning form at home.

The London club earned a two-point safety cushion above the relegation zone with a 3-0 win over Swansea, their third home league triumph in a row.

And Hughes believes QPR can beat the drop if they overcome Tottenham and Stoke in their last two home games.

"If we carry on playing like we have been doing at home, I'm convinced we'll be fine," he said.

Hughes, however, is expecting QPR's battle to beat the drop to go to the last day of the season.

After fellow strugglers Wigan caused a major surprise by defeating leaders Manchester United, Hughes predicted there would be more twists and turns to come in the scramble to stay up.

"People looked at our run-in and told us it was too hard, but we're getting good results at the moment," he added.

"There are going to be twists and turns, but that will happen at the top and the bottom.

"We've just got to get on with our business, and if we can do that we can be a match for anyone."

Captain Joey Barton marked his return to the side by opening the scoring against Swansea before further efforts by Jamie Mackie and Akos Buzsaky sentenced Swansea to a fourth straight defeat.

"We had a game plan against Swansea and I thought the players were excellent. They got the job done," said Hughes.

After an impressive season following promotion from the Championship, Swansea are limping to the finishing line following defeats to Everton,Tottenham and Newcastle.

"I can only apologise to our supporters," said Rodgers.

"I have never had to do that before but we were poor. We beat ourselves.

"It's been a terrific season but we need to get over the finishing line.

"What I have said to the players is that we're not mathematically safe. We need to regroup and if we can do that then it will have been an iconic season for us."