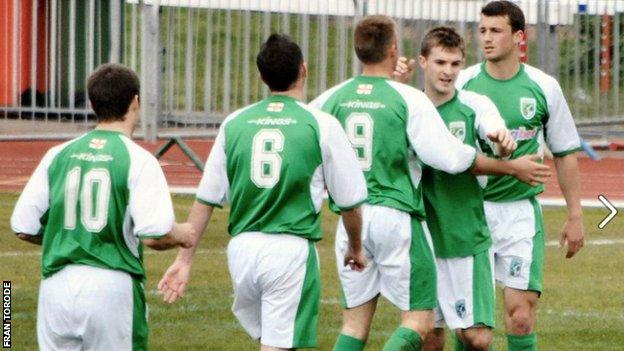 Guernsey manager Kevin Graham has named his initial 23-man squad for next month's Muratti with Jersey.

Twelve of the squad that beat Alderney in last month's semi-final have kept their places.

The only two non-Guernsey FC regulars are third-choice goalkeeper James Hamon and defender Joby Bourgaize, who has played only once for the Green Lions.

Former New Zealand Under-17 midfielder Rhys Jordan gets his first call-up for a senior island side.

Graham will then cut his squad to a final 18 in the week before the match.

And he says it is inevitable that almost all of his squad have been drawn from the pool of players playing for Tony Vance's side.

"They're playing regular football against sides in then UK and it allows them to improve and their fitness levels are higher than those who are playing a 20-game season in Guernsey," he told BBC South West.

Many of the team will play in Guernsey FC's Combined Counties League Premier Cup final tie with Colliers Wood United the Friday before the annual grudge match with Jersey on Bank Holiday Monday.

"I'm not worried, I think there's a potential to pick up knocks on the Friday night, but I think it can work both ways.

"Hopefully we can use the momentum of that trip across to the UK and the spirit that the team picks up from the final will act as a positive for us on the Monday."

And Graham is wary of a Jersey side, who despite not playing in a UK league like Guernsey, have reached the final of the FA Inter-League Cup.

"I've kept a close eye on proceedings across the water and spoken to Craig Culkin [Jersey manager] as well.

"They've done really well and I wish them all the best in the final in the Isle of Man.

"The cup run has probably helped them get on a bit of a roll, it benefited us a couple of years ago and it will benefit them this year."