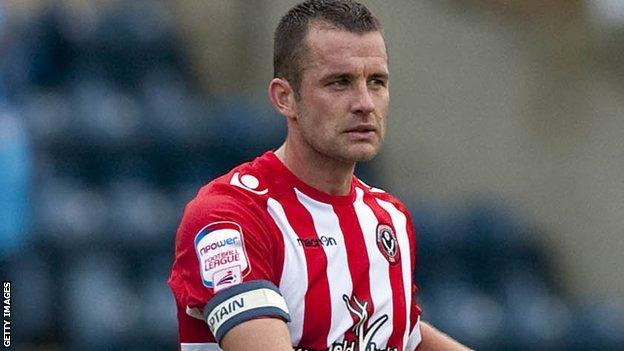 Sheffield United midfielder Michael Doyle says the Blades are not looking at the form of their city rivals Sheffield Wednesday.

The two Steel City clubs look to be in a two-horse race to secure the second automatic promotion spot in League One.

United's win at Rochdale on Tuesday moved them on to 85 points, two ahead of Wednesday with four games left.

"We're looking after ourselves. As long as we do the business it's in our hands," Doyle told BBC Radio Sheffield.

"I don't want to use a cliche but we're just looking at the next game. We've won five in a row and if we beat Leyton Orient on Saturday that'll be six. We're not looking past that."

The former Coventry and Leeds man has been a virtual ever-present for the Blades this season, appearing in 47 of their 51 matches.