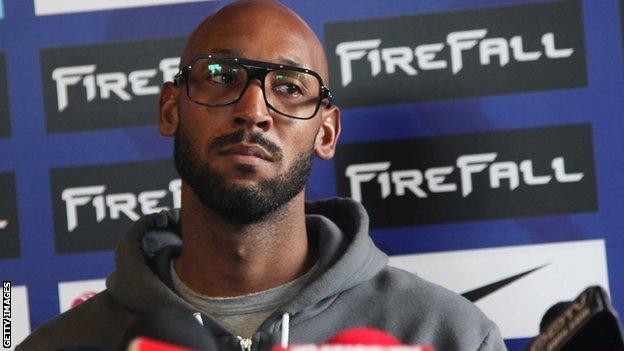 Nicolas Anelka has lost his first match as player-manager of Chinese Super League side Shanghai Shenhua following his appointment on Thursday.

The former Chelsea striker, who moved to Shenhua in January, saw his side lose 1-0 at home to Tianjin Teda.

The final whistle was greeted with boos and the defeat leaves Shenhua in the bottom five of the league with four points from six matches.

Shenhua hope Anelka's contacts will help him attract big names to the club.

The 33-year-old, who oversaw his first training session on Thursday, has been allowed to bring in three coaches, including his assistant Baptiste Gentili and former Tottenham goalkeeper Ian Walker, who he played alongside at Bolton.

It is thought he will initially take charge until the end of season after succeeding former Fulham manager Jean Tigana.

Shenhua have already signed Brazilian forwards Cleo and Muriqui in a bid to bolster their squad, while reports linking Chelsea striker Didier Drogba with a move to Shanghai are likely to gather momentum.

Drogba's contract at Stamford Bridge expires next summer and talks over an extension are deadlocked.

The Ivory Coast forward has asked for a new two-year deal, but Chelsea are only willing to offer the 33-year-old an additional 12 months and no further meetings are planned.

Drogba has attracted interest from all over the world, including Los Angeles Galaxy and Anzhi Makhachkala, of Russia, but Shenhua are expected to be the first to make a formal approach.