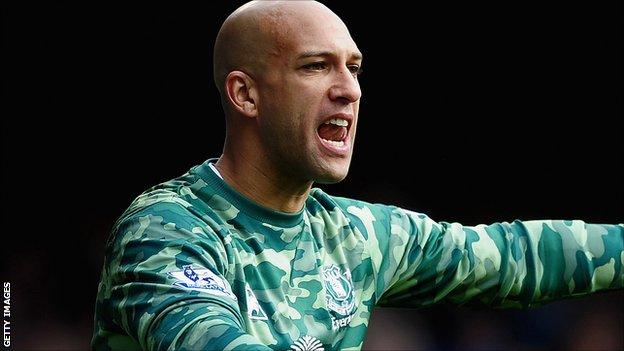 Everton's Tim Howard believes the team that conquers their early nerves will emerge victorious from their FA Cup semi-final against Liverpool.

"Both sets of players will be tense," the keeper told BBC Radio Merseyside.

"That's what happens in derbies, and then you can add onto that the big occasion and the big stadium.

"Both sides have top players who have played in World Cups and played in cup finals, so once the nerves settle down, it will end up being a good match."

USA international Howard, who won the FA Cup with Manchester United in 2004, added: "I've played in a lot of big games so you learn how to manage it psychologically.

Liverpool have been victorious in both derbies against Everton in the Premier League this season, and midfielder Leon Osman is hoping it will be 'third time lucky' for the blue half of Merseyside on Saturday.

"They've won both of the games that we've had against them this year, they've won a cup already as well, so it's going to be difficult," said the 30-year-old.

"It's a semi-final at Wembley against our closest rivals and it's a game where form goes out of the window.

"It's a game of football that you've got to win and that's all that's important.

"You have to play what's in front of you and it doesn't matter whether they are Premier League or non league, it's a team that you've got to beat to progress to the next round.

"Ultimately it's one more step towards trying to win the FA Cup."

The Toffees will be making their first appearance at Wembley since losing the 2009 final to Chelsea, having defeated Manchester United on penalties in a goalless semi-final.

And David Moyes' side go into the game in better form that their local rivals, having won four and drawn one of their last five matches in all competitions.

Saturday's winners will return to Wembley on 5 May to face either Chelsea or Tottenham in the final.