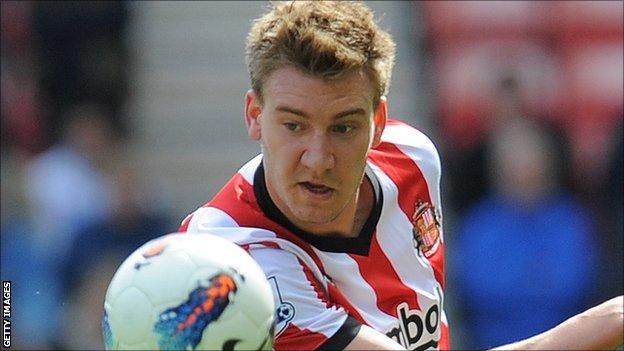 Sunderland manager Martin O'Neill says he will wait until the end of the season before deciding whether to sign Nicklas Bendtner on a permanent deal.

The 24-year-old Denmark international signed from Arsenal on a season-long loan in August 2011 and has since scored seven goals in 26 games.

"We have not entered into any discussions at all, let's see what the end of the season brings."

O'Neill added: "While we are improving as a team, we are not Arsenal at the moment, and he will have been used to - at a team like Arsenal - being able to retain the ball for good spells of games."

Bendtner has had a mixed spell on and off the field at the Stadium of Light, with criticism from fans for aspects of his play added to an arrest and charge of damaging vehicles against him that was later dropped.

He also suffered a facial injury that forced him to don a protective mask, following fears he may have lost his sight.

However a run of four goals in eight games, including a penalty that earned a point in the derby with Newcastle United, has brought the Dane into prominence under O'Neill's tutelage.

"While Nicklas will have a few detractors who says he doesn't do this, and doesn't do that, actually we're getting something out of him, and he's responding," said the Northern Irishman.

"He wants to be top class, but there are certain things you have to do in a football game to make you that.

"I thought his performance against Manchester City was excellent, really excellent."