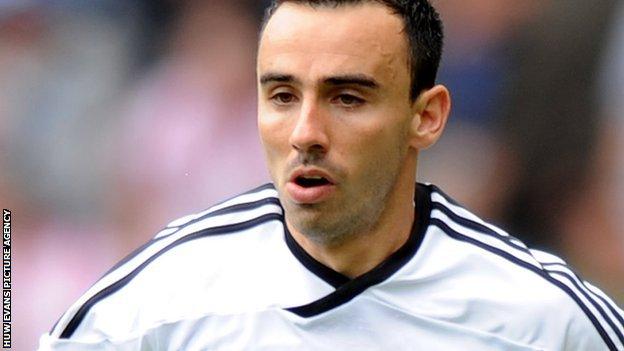 The Swans suffered their fourth defeat on the trot when they lost 3-0 to QPR at Loftus Road on Wednesday.

"We need to stop this [run of results] now," said 29-year-old Britton.

The Swans face relegation-threatened Blackburn Rovers at the Liberty Stadium on Saturday in the first of their five-game run-in to the end of the season.

Brendan Rodgers' team, who have earned plaudits for their style of play and success in the Premier League, are in the middle of their worst run of results since they were promoted to English football's top flight.

Defeats to Everton, Spurs, Newcastle and QPR - with only one goal scored in the process - have shaken the Swans, but Britton sees Saturday's visit of relegation-threatened Blackburn as a perfect opportunity to rediscover their form.

"It's four defeats in a row and we need to pick up points," said Britton.

"We need a performance and to try to come away with a result - a draw or a win.

"We have to stop the rot and get back to basics and what has served us so well for three-quarters of the season."

Swansea face a Blackburn side still reeling from the manner of their narrow 3-2 defeat against a 10-men Liverpool side at Ewood Park, which leaves them three points from safety.

The Welsh side face the three sides currently in the Premier League relegation zone - Blackburn, Bolton and Wolves - in their next three games.

Britton has urged his team-mates to match the desire and survival instincts of those three sides fighting for their Premiership life.

"We have a game against Blackburn and we want to get this out of our system," said Britton.

"We want to give our fans something to cheer about.

"We need to match them because, if we don't, we are going to come away with no points."

The Swans lost the first fixture between the two sides at Ewood Park but Britton has revealed the resolve for revenge at the Liberty.

"We lost there 4-2, and we were disappointed with that result, and we don't like any team doing the double over us," said Britton.

"They will come here disappointed with their result against Liverpool and they will be looking to pick up some points to try and help them survive.

"We spoke after the Fulham game, the last game we won, and we talked about finishing the season well but so far we have four defeats in a row.

"We have five games left and we have to try to finish the season well and pick up some wins."