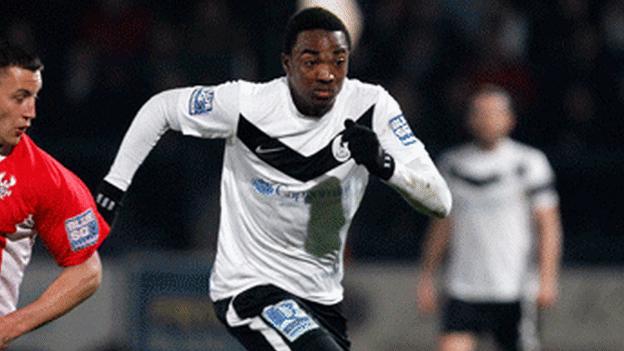 AFC Telford's bid to extend Bristol City striker Marlon Jackson's loan to the end of the season has been refused.

Jackson, 21, was originally signed in January, only to pick up a hamstring injury, before returning last month for a second loan spell with the Bucks.

But Football Conference rules allow only an extension to a continuous loan.

"He did really well for us in his first month before getting injured and we'd liked to have kept him," Telford boss Andy Sinton told BBC Radio Shropshire.

Sinton has not ruled out a summer approach for Jackson, who has returned to Ashton Gate for now.

"His contract at Bristol City is up this summer," said Sinton. "And that's something I'll keep an eye on.

"I know he's enjoyed himself here, and it's been really frustrating for him and for us."

Jones should be back in contention as Telford continue their quest to stay in the Blue Square Bet Premier, starting with this Saturday's trip to Ebbsfleet.

Telford will start the afternoon against mid-table Fleet in 20th, four points clear of Hayes & Yeading.