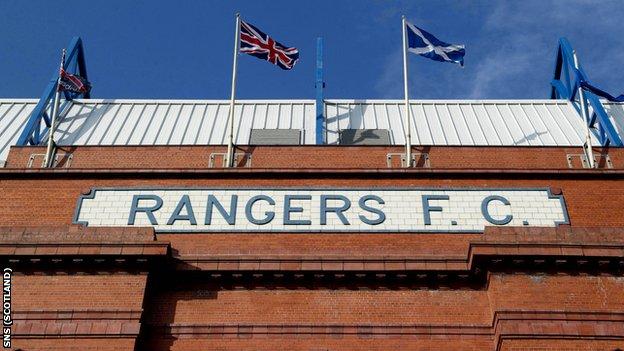 One of the three bidders for Rangers has told BBC Scotland that his offer stands, despite proposed changes to sanctions for insolvent clubs.

Bill Ng, the man leading a consortium from the Far East, is unhappy with the goalposts being shifted.

However, he added: "My bottom line is to ensure Rangers's continued survival. We stand by what we promised.

"A change of rules does affect the finances of the club, but it does not affect our passion."

The Scottish Premier League will consider new proposals for financial fair play at a meeting on 30 April.

And Rangers' administrators Duff & Phelps say the announcement of the suggested new penalties has caused "a delay in the sale process".

"It is better to know the changes early than to get surprises after we have done our budget," added Ng.

The other bids for Rangers have been made by Blue Knights, led by former director Paul Murray, and a group involving American tycoon Bill Miller.

BBC Scotland has not been able to contact either party concerning this development.

On hearing the SPL's proposals, Duff & Phelps said: "Inevitably, bidders are now considering this information and will have to take a view as to whether it will affect their individual bids as they now stand.

"We hope to receive feedback from bidders as soon as possible in order for us to take the sale process forward as quickly as we can."

Meanwhile, Duff & Phelps are expected to announce a preferred bidder next week, with the chosen party then entering a period of exclusivity to undertake due diligence.