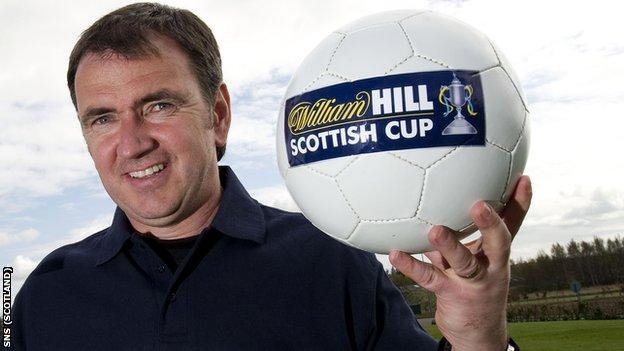 Hibernian manager Pat Fenlon aims to end a disappointing season on a high with an appearance in the Scottish Cup final to reward the club's fans.

"It's important we get ourselves to the final," said the Irishman. "We owe our supporters for a poor season.

"It's important we give them something to smile about at the end of it.

"If we can stay in the league, which is the main goal, and get to a cup final then it makes the season look a lot better than it probably is."

To the reach the end-of-season showpiece, Fenlon's men must get the better of Aberdeen at Hampden on Saturday.

And the game provides a welcome distraction for followers of the Edinburgh outfit, who have seen their team struggle at the wrong end of the Scottish Premier League.

"It is a little bit more relaxing, even though there's a massive prize at stake," explained Fenlon.

Without setting the world on fire, we've made slow progress

"To get to a cup final would be fantastic."

Hibs last won the Scottish Cup in 1902 but Fenlon, who won cups in Northern Ireland and the Republic of Ireland before moving to Easter Road last November, is not phased by reminders of that long barren streak.

"It's obviously a big thing for supporters, but it's not something that has hit me too much," he said.

"It's my first go at the Scottish Cup so I haven't been steeped in that."

Much has also been made of the prospect of an Edinburgh derby in the final if Hearts beat Celtic on Sunday but Fenlon is concentrating solely on Aberdeen.

"It's about winning the semi-final," he added. "It's really important we focus on the job in hand.

"I don't think there's a hell of a lot between the teams and I think it will be tight come Saturday.

"We have to make sure we have enough players at the level you need. If you're carrying three or four, you can't get away with that in semi-finals.

"If we break on the day, or if someone does something exceptional, that could be the winner."

A victory at Inverness and a draw with Motherwell has seen Hibs open up a seven-point gap on Dunfermline at the bottom of the SPL to ease relegation worries.

"Without setting the world on fire, we've made slow progress," said Fenlon.

"After my fifth or sixth game, I think we've done all right.

"We've created a little bit of a gap and that gives the players confidence.

"I've told the players to go and enjoy the occasion but it's a horrible thing to lose a semi-final.

"We've got a game plan and we need to make sure people stick to their jobs but also go and play - the important thing with semi-finals is that you relax and don't play the game before the game.

"I've seen that before when people can let the occasion affect them.

"We've got a few that have sampled the Hampden atmosphere and some who haven't, but that's not always a bad thing.

"The players all know what it would mean to the club if they can win the cup and that is a real driving force."