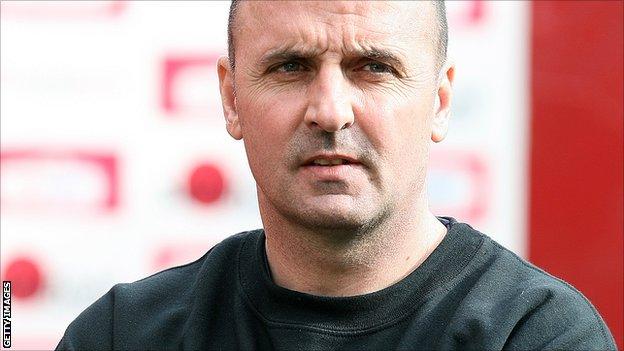 Accrington manager Paul Cook will not be made to wait by any players who are offered new contracts in the summer.

"What we don't want is to get involved in a six-week auction, where lads will use an offer from us to see if anything better comes along," Cook told BBC Radio Lancashire.

"What I'll do is, if they don't sign that day, I'll withdraw the offer.

"I'm not going to get involved in waiting around. If they don't want to play for us, I won't wait for them."

He continued: "I think lads have got have got to want to play for clubs for the right reasons. Certain levels of money should demand loyalty.

"When you're playing lads serious money, you should get more loyalty.

"With agents and different stuff, sometimes there are too many opinions in a lad's ear, when really he should just want to play football."

Cook replaced John Coleman as manager at the Crown Ground in February and has only won three of his 14 matches in charge.

But Stanley are comfortably in mid-table in League Two and Cook has said that will allow him to experiment with his squad in the final four matches of the season, starting with the trip to Cheltenham on Saturday.

"There are a couple of lads there, like Liam Willis, Kurtis Guthrie and one or two others, that I want to have a look at," added the former Wolves and Coventry midfielder.

"The likes of Ryan Hopper will play again, he's done nothing wrong. We'll get these lads in the team and see how they do.

"We want them to be able to play in big games. We don't expect them to play well for 90 minutes, but just show us some signs."