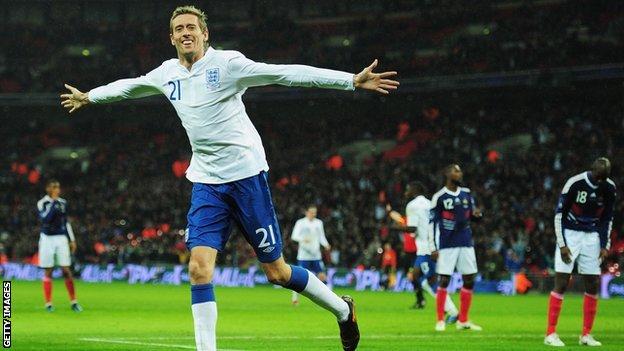 Peter Crouch deserves another chance with England at Euro 2012 after what he has done this season, according to Denmark goalkeeper Thomas Sorensen.

Sorensen, who faced England last year, is a team-mate of Crouch at Stoke.

The Dane told BBC Sport: "Crouchy will hopefully go with England. I can only say he has done so, so well for us.

"If that's not enough to get in the England team, the manager there will decide. But I definitely feel he needs a chance."

The players are likely to find out about whether they are in the England squad a week before the Premier League season ends on 13 May.

The Stoke striker has scored five goals in his last nine appearances, including a stunning volley against Manchester City, to take his tally for the season to 13.

But the 31-year-old has not played for England since November 2010, despite an international goal tally of 22 goals in 42 appearances, after falling out of favour with former manager Fabio Capello.

Capello left England in February and the Football Association are yet to appoint a new manager.

Sorensen has 100 caps and has played in four major tournaments. If Crouch joins him in Poland and Ukraine for this summer's European Championship, they will form part of a sizeable Stoke contingent.

Sorensen added: "There are a few of us - Glenn Whelan, Jon Walters and maybe Marc Wilson will go with Ireland. The more the merrier. I think it's great for the club and its image."

Domestically, the former Aston Villa and Sunderland goalkeeper, 35, has been in a tug-of-war for the Stoke goalkeeper's jersey, with 24-year-old Asmir Begovic.

Sorensen, who has made 22 Stoke appearances this season and was selected for last year's FA Cup final, admitted: "It's a constant battle wherever you are in the pecking order."