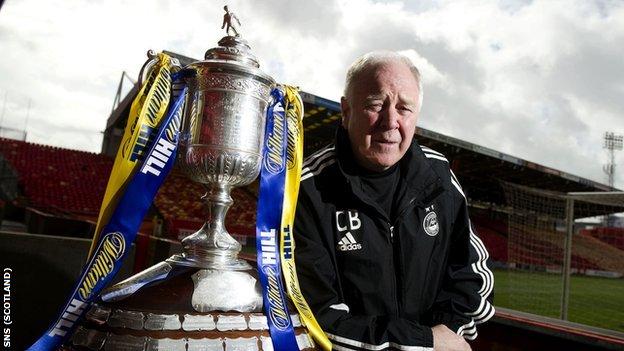 Aberdeen manager Craig Brown says guiding a club into the Scottish Cup final would be a new career highlight.

Brown's side take on Hibernian in Saturday's semi-final and the former Scotland manager wants to create more happy memories at the national stadium.

"I've been very fortunate and have had a lot of great moments at Hampden.

"To get a club to the Scottish Cup final would be excellent for me. I've got a great desire to see the players get to the final," said Brown.

The Dons last appeared in the final in 2000 and Brown is urging his players to treat the clash with Hibs "like another fixture".

"Forget about the occasion, the occasion's a semi-final," Brown said. "If you think too much about that and fail to focus on the game of football, you could come a cropper.

"We'll go out and play Hibernian as if we were playing them in a league game. The importance of winning this one is quite critical, we don't want to be left at the post.

"I think we are pretty even in standard.

"There would be a financial boost, which can help retain players that we want to keep. Hopefully we can tidy up the squad for next season."

Meanwhile, Dons captain Russell Anderson may have to settle for a place on the bench with the defender having made just two substitute appearances since rejoining the club.

"I realise the players who have been playing regularly at the back have done very well recently," he said.

"I know he [Brown] could well look favourably upon that. I would have absolutely no arguments at all if he decided to go with the same back four.

"He hasn't said one thing, which is no different to any other week. Everyone is in the same boat as me waiting to find out what the team is."