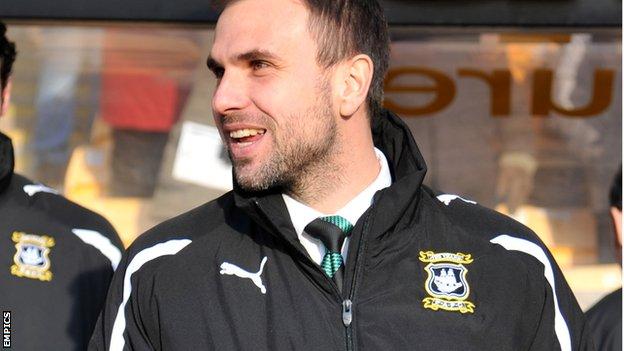 Plymouth Argyle manager Carl Fletcher has refused to speculate on his future at the club.

Last month Argyle owner James Brent said he would review Fletcher's role at the end of the season.

But when asked if he had discussed his future - or that of the squad - for next season with Brent, Fletcher said: "No. The focus is now.

"It's not a couple of months, it's today, you have to live now," the Pilgrims boss added.

"There's no point thinking about the future because if we don't do things right in this moment then the future won't be what you want it to be."

Fletcher took over as caretaker player-manager following and was given the job on a permanent basis six weeks later.

Under Fletcher's leadership, Plymouth, who take on champions-elect Swindon Town on Saturday, have pulled away from the bottom of the Football League and look set to stay in League Two.

"All I'm focusing on is Swindon on Saturday and that is it, that's as far as I look forward," Fletcher continued.

"It's Swindon that is the main priority at the minute and everything else in the future can wait."