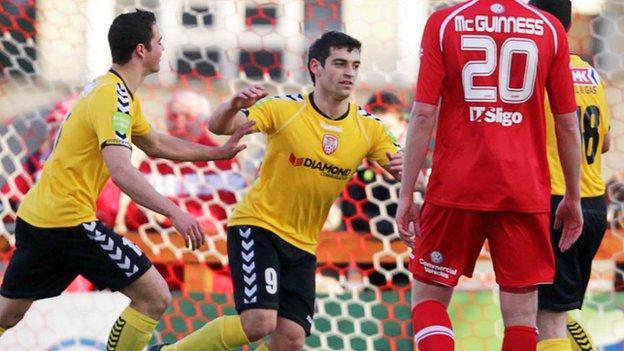 Danny North put Rovers ahead on 24 minutes with a backpost tap-in before Romauld Boco squandered a good chance.

McDaid hit the top corner with his 36th minute spot-kick after a push by Iarfhlaith Daveron on Simon Madden.

Derry midfielder Patrick McEleney struck the crossbar early in the second half and the visitors held firm in defence to secure a deserved point.

Boco should have doubled the lead two minute later but he missed the ball from eight yards with just Doherty to beat.

The lively McDaid, a former Sligo player, was starting to cause problems for the Rovers defence before he cooly despatched the penalty.

Stephen McLaughlin went close for the visitors just before the break, sending his backpost header wide.

McEleney's superb half-volley after 49 minutes hit the underside of the bar but fell the wrong side of the goal-line for the Candystripes.

Sligo dominated possession in the second half but rarely threatened with Doherty saving easily from Boco and Lee Lynch.

City have slipped one place to sixth after Shelbourne's victory over Bray Wanderers.