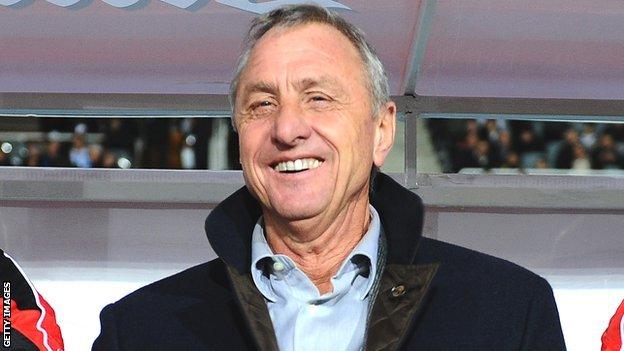 Johan Cruyff is among the names being targeted by Liverpool after Damien Comolli's departure as director of football, BBC Sport understands.

Reds owners Fenway Sports Group (FSG) have yet to draw up a definitive shortlist to replace Comolli.

But the Dutchman, 64, has impressed FSG chief John W Henry in his senior roles with Ajax and Chivas in Mexico.

Cruyff, who coaches the Catalan representative side, has also recently stepped down from a role with Ajax.

While FSG do not intend to radically alter the structure of the club, they are keen to bring in a respected name who can operate in a role that will both assist manager Kenny Dalglish, while overseeing the recruitment and scouting of players.

Cruyff, who won three European Cups as a player with Ajax between 1971 and 1973, is one of a number of names under consideration, although it is not known if he is interested in moving to Anfield.

Former Barcelona director Txiki Begiristain is another leading contender while Louis van Gaal, who has been out of work since being sacked as coach of Bayern Munich in April last year, has indicated he would consider the position were he to be approached.

Liverpool were unavailable for comment after a day of departures from Anfield.

Sources close to Comolli indicated that he had been stunned by his sudden dismissal, having been informed by Henry and chairman Tom Werner late on Tuesday night. The Liverpool players were then told at a hastily arranged meeting at the Melwood training ground the next morning.

Commoli's dismissal appeared to signal the first stage of a backroom overhaul. The sports science team assembled by Christian Purslow, during his spell as managing director under Tom Hicks and George Gillett Jr, is also to be dismantled, with Peter Brukner, the head of sports science, leaving the club.

Kenny Dalglish was, however, told he continues to enjoy the "full support" of the club's owners.

"We've got great confidence in Kenny," Werner said. "We feel the team is going to make strides in the future."

Cruyff, who was on a supervisory board at the Amsterdam Arena, stepped down from his role after a long-running feud with Ajax directors and fellow board members.

He won a court battle in February overturning the appointments of Van Gaal and Martin Sturkenboom against his wishes.

The supervisory board quit after losing the case, and Cruyff eventually resigned on Wednesday with an agreement in place for choosing a new board.

Ajax said in a statement that Cruyff will "remain involved with the implementation of his football vision within the club".