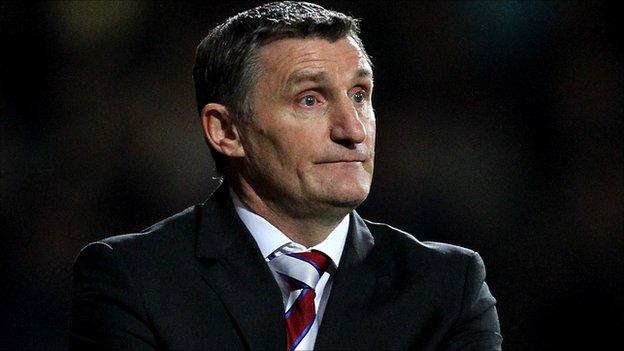 Middlesbrough manager Tony Mowbray has said the club's promotion hopes remain strong despite a run of eight Championship games without a win.

The Teessiders have drawn four and lost four of those fixtures but remain just two points outside the play-off places with four games to play.

"With our points return since Christmas a huge opportunity has slipped through our fingers," Mowbray told BBC Tees.

"Yet it is still incredibly there for us, we're still in there kicking."

Mowbray's side have lost their last two matches, crucially against play-off rivals Cardiff and Hull, and welcome a Derby side on Saturday that have faint promotion hopes of their own.

However with Boro ensconced in the top half of the table, having been in the top six for much of the season, Mowbray says his side remain focused on achieving the aim of a return to the Premier League after three seasons away.

"The players know the situation," the Boro boss added. "I was talking to them today after training, it's very much there for us.

"I watched them in training and how competitive at times training can be, they're great qualities to have and we have to take that into games.

"We need to find those qualities again over the next four games, the next game is the most crucial one because we need to feel as though we have a realistic chance.

"If we win on Saturday we might find ourselves in the top six, we might be a point off it.

"Then, if we beat Doncaster on Tuesday - which you have to think is a must-win game - on the back of that you'd like to think you'd be in the top six and then you've got two games to keep you in there."