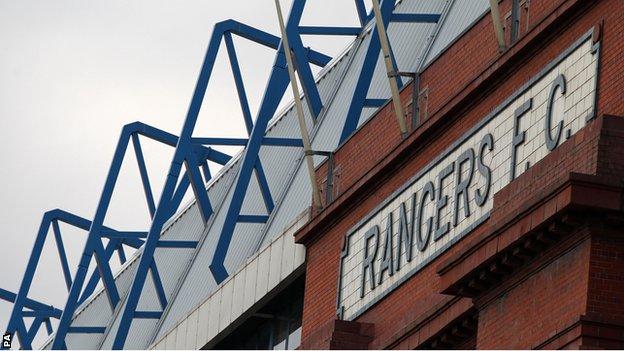 Uefa, in a statement, stressed that issues regarding club licensing and financial fair play falls under the authority of the Scottish governing bodies.

It said it was aware of the "difficult financial situation" at Ibrox.

Rangers have been in administration since February and Duff & Phelps has delayed naming a preferred bidder.

The delay follows proposed changes to sanctions for insolvent clubs.

The SPL will consider new proposals for financial fair play at a meeting on 30 April.

Uefa said it has "been in close contact throughout with the Scottish FA and the administrators of Rangers FC, in order to explain the club licensing and financial fair play rules and how they would apply in different possible scenarios".

"Such a situation falls under the authority of the national governing bodies responsible for evaluating and deciding on any necessary measure(s) they estimate appropriate to avoid similar cases occurring in the future.

"Uefa is entirely confident that the Scottish FA will deal with this case in full compliance with the national club licensing regulations and in the spirit of Uefa's club licensing and financial fair play regulations."

Duff & Phelps says the announcement of the suggested new penalties has caused "a delay in the sale process".

One of the three bidders has told BBC Scotland that his offer stands, despite proposed changes to sanctions for insolvent clubs.

Bill Ng, the man leading a consortium from the Far East, said the club's survival was his priority.