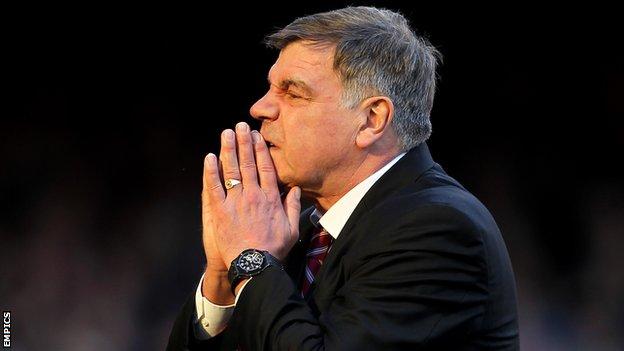 West Ham boss Sam Allardyce says he does not know if his side are capable of ending their home form hoodoo.

The Hammers have not won any of their last seven games at Upton Park.

He told BBC London 94.9: "I just don't know if the team is going to go out and get that victory because it has been so long that we've waited.

"The longer it goes on the harder it is. We can only do it by continuing to do the right things in and out of possession and not making mistakes."

He added: "The best teams in the country are the [ones that are] best at defending and winning the ball back.

"If we want to win automatic promotion, we've got to get both ends right."

West Ham host Brighton on Saturday, and Allardyce has encouraged his players to learn from their shortcomings in recent games against fellow promotion candidates Reading and Birmingham.

"When we actually start getting our front men putting the ball in the back of net, our defensive side goes under," he continued. "That surprises me a great deal.

"We let it happen against Reading when we got in a fantastic position. To lose the way we did was shocking. I went home and couldn't believe it.

"To repeat it against Birmingham surprised me yet again.

"We must not gift the opposition goals."