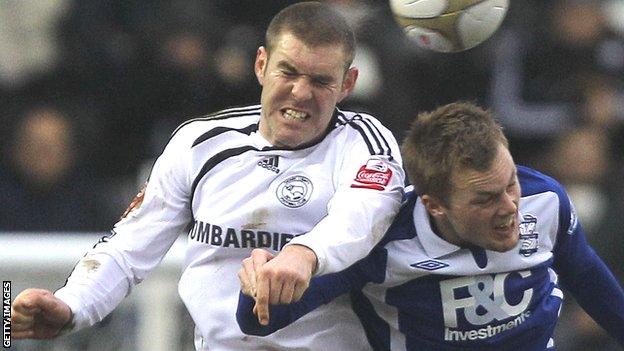 Jake Buxton says he wants to be starting every week for Derby County next season, if he stays at the club.

The 27-year-old defender, who joined the Rams from Burton in 2009, is out of contract at the end of the season.

"When I was coming off the bench and getting that buzz, I was still happy," Buxton told BBC Radio Derby.

"But playing every week, you realise that's not enough, that you want to start every game. That's the aim for me next year, if I'm here."

Buxton played under Derby manager Nigel Clough at Burton, helping the club win promotion to the Football League for the first time in their history.

"You do have to pinch yourself and realise where you've come from," Buxton said.

"It is crazy really, to be with Nigel Clough and at a club like this.

"Four years ago we were playing Eastbourne away around this time to try and clinch promotion, and now I'm playing away at Leeds and winning 2-0."

The former Mansfield defender has started the last six matches after coming off the bench to score the only goal in Derby's 1-0 win against Nottingham Forest in March.

Buxton replaced captain Shaun Barker, who suffered a knee injury that will keep him out for all of next season.

"To beat Nottingham Forest twice and beat Leeds twice this season for the first time is an amazing achievement," Buxton added.

"It's a credit to all the lads here and the gaffer and his team.

"Obviously Jason (Shackell) is here for a couple more seasons, and we're unlucky that Shaun has picked up his injury, but we'll see what happens for me.

"I've spoken to the club about my contract and we'll see where it goes."