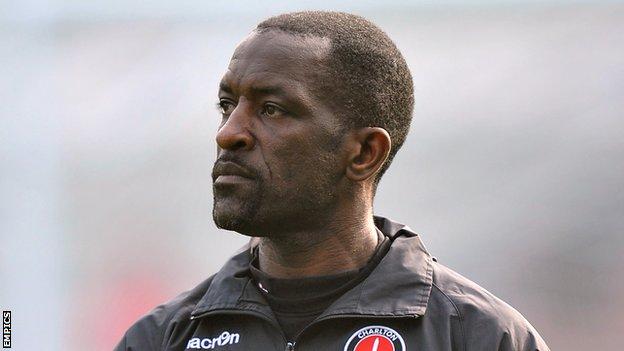 Charlton Athletic boss Chris Powell is playing down their chances of securing automatic promotion this weekend.

The Addicks will seal a return to the Championship if they beat Carlisle on Saturday and third-placed Sheffield Wednesday fail to beat Colchester.

He told BBC London 94.9: "It's a real possibility but results will have to go for us elsewhere.

"If I'm told at the end of the game they have gone for us, that would be sensation. But I'm not banking on it."

He added: "We know [Sheffield] United and Wednesday have been getting results. We've kept the gap but they can still get it back."

Charlton's preparations have been boosted by a group of five fans who have sponsored the club to fly north to Carlisle, saving them a round trip of over 650 miles via coach.

"We were looked at the coach or possibly the train but it's great we can fly," Powell continued.

"It's very thoughtful of the five sponsors who have laid on the plane. We can be relaxed, refreshed and ready to play.

"I feel sorry for the fans [having to make the long journey] but they'll be excited by the prospect of what can happen."