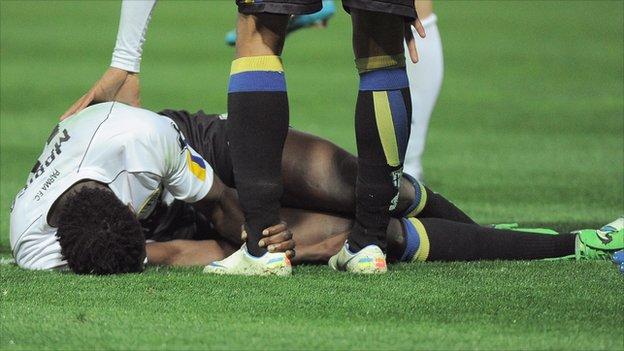 Kenya and Parma midfielder McDonald Mariga is facing several months out through injury.

The Italian club have confirmed he ruptured his anterior cruciate ligament in their 2-0 league win over Novara on Wednesday.

Parma have not indicated how long he will be out for but the injury usually takes several months to recover from.

It effectively rules the 25-year-old, who is on loan at Parma from Inter Milan, out for the rest of the season.

He is also very unlikely to feature for Kenya in their 2014 World Cup and 2013 Africa Cup of Nations qualifiers in June.

Kenya are due to travel to Togo for the second leg of their Nations Cup qualifier on the weekend of 15-17 June with a 2-1 lead from February's first leg.

Mariga missed the win over Togo after he quit the team in a row over money.

So there were already doubts over his future involvement with the Harambee Stars even before he sustained the injury.

The Kenyans are also due to play Malawi and Namibia in World Cup qualifiers in June, Nigeria are the third team in Group F.