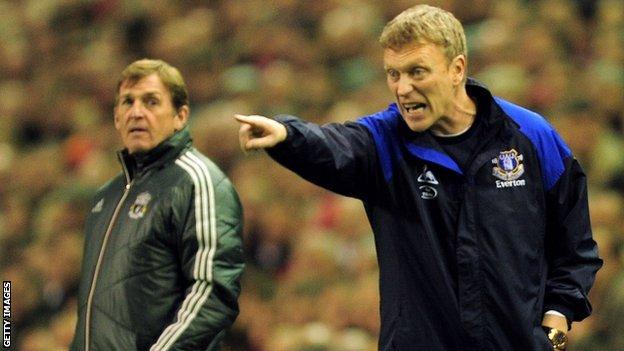 The Toffees have won four and drawn one of their last five matches.

Moyes said: "We couldn't be going into the semi-final in any better form as we are in as good a condition as we possibly could be.

"We have to put that in perspective. We are probably underdogs even though we are in fine form at this time."

Since Everton's last trophy, the 1995 FA Cup, Liverpool have won the Champions League, the Uefa Cup, the FA Cup twice and the League Cup three times.

Seventh-placed Everton are a point and a place ahead of Liverpool in the Premier League table but were beaten 3-0 by their neighbours when the teams met at Anfield in the league last month. The Reds were also on top at Goodison in October, winning 2-0.

Moyes said Everton had rectified many of the problems they had experienced earlier in the season.

He said: "I think teams who have lots of quality and good footballers often need a great heart and desire.

"You need all those elements to be a great side and win big games and, at present we are getting all the qualities I hope you would from Everton.

"The players have a feeling they are doing the right things. We are scoring goals, which we weren't at the start of the season, so we have to keep that momentum going.

"We feel good about ourselves but we are up against a side we know are as good as anyone on their day.

"We've beaten Chelsea and Manchester City this season but one of the hardest games we've had has been against Liverpool, as shown by the two results."

And he added: "[They are] a really good club with great traditions, who have been in this situation many times before, and have a great history. But we have that here at Everton as well."