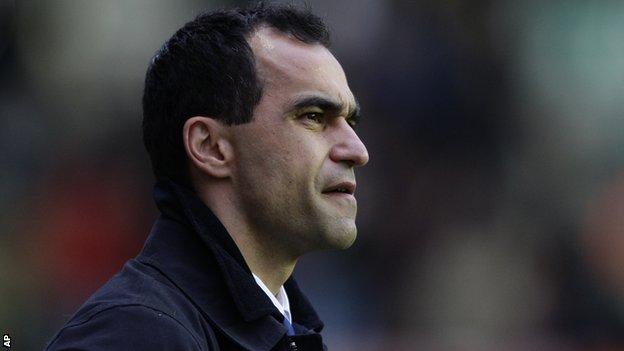 Roberto Martinez believes Wigan's Premier League fate will not be decided until the final day of the season.

Wigan, who are two points clear of the relegation zone with five games left, will play fellow strugglers Blackburn and Wolves in their final two games of the season.

"I think it will go down to the last game of the season because the fixture list has been a bit peculiar," he said.

"We feel that's going to make it a race until the last kick of the season."

Wigan's win over Manchester United on Wednesday saw them move out of the bottom three for the first time since October, ahead of Monday's trip to Arsenal.

The Latics have hit form at a crucial time, winning three of their last four matches despite struggling for the majority of the campaign.

"Earlier in the season we suffered eight straight defeats and if somebody had said we would achieve our aim in the last game of the season, we would have taken that," added Martinez.

"The players have been working to try to fulfil the potential they've got as a group. I always felt we had that potential and now we need to make sure we extend that until 13 May."