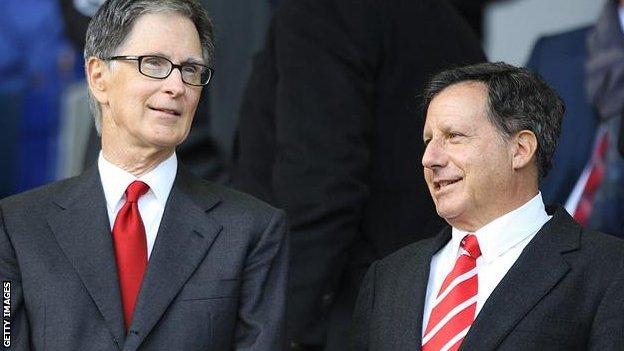 Liverpool owner John W Henry has flown back to the United States rather than attend Saturday's FA Cup semi-final against Everton at Wembley.

The pair spent only three days on Merseyside during their visit.

During that time director of football Damien Comolli left by mutual consent.

Henry and Werner, the principal representatives of the Fenway Sports Group (FSG) that owns Liverpool, are keen to have a replacement for Comolli in place before the summer transfer window opens.

Netherlands legend Johan Cruyff is a candidate for a senior role at Anfield, but it is understood no contact has yet been made with the 64-year-old.

FSG is also under pressure at Fenway Park after the Red Sox were booed off the field by their own fans in the final home game of last season.

However, after losing five of their first six away games of the current campaign, the Red Sox beat Tampa Bay 12-2 in their opening home match.

Baseball is Henry's first love. Having owned a small share in the New York Yankees in the early 1990s, he became sole owner of the Florida Marlins in 1999, paying a reported $158m (£100m) for the Major League Baseball outfit.

Backed by Werner and the New York Times, Henry took over the Boston Red Sox in 2002 before fronting the bid to buy Liverpool in October 2010.