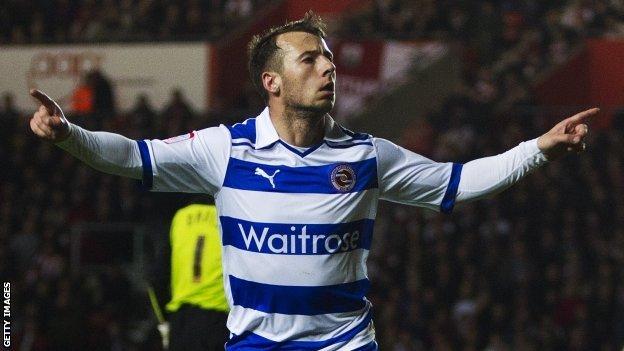 Jason Roberts headed Reading in front and after Rickie Lambert levelled for Saints, Le Fondre scored twice in the last 20 minutes to secure the victory.

"We made a substitution that was positive in winning the game," said Royals manager McDermott.

"[Le Fondre] is born to score goals. He got two chances and scored two goals."

Reading have won 14 of their last 16 matches to put themselves on the verge of promotion back to the Premier League.

"It's an amazing achievement," McDermott added. "The players have done that.

"Apart from the first six games of the season, we would be winning this league by a long way.

"We had a tough summer as everybody knows and I keep banging on about it, but that is what happened.

"We lost the play-off final, we lost players, we had to replace them and we had to find another way and we've done that."

Despite the defeat, Southampton remain in the automatic promotion spots, six points ahead of the Hammers, who have a game in hand.

And Saints manager Nigel Adkins still believes his side will be playing in the Premier League next season.

"It is in our own hands," he said. "Control the controllable - we keep saying it and it is very much what we do.

"All we can do is concentrate on what we do, hence not going to watch West Ham or anything like that because we can't control that."

Adkins was more concerned by his side's defending in the defeat.

"From our point of view we gave three poor goals away," he said.

"Well done to Reading, who came here and got three points, but we gifted them three goals.

"There are three games to go and we have to remain positive. There will still be more twists and turns. We will analyse this game, draw a line underneath it and move on."