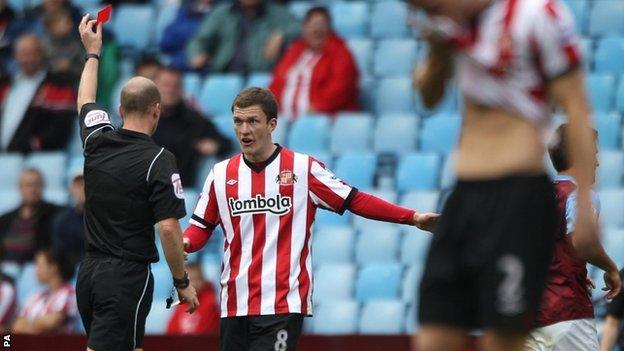 Aston Villa remain in relegation trouble after Martin O'Neill's Sunderland earned a point on the manager's return to Villa Park.

Nicklas Bendtner then missed two good chances for the visitors, before having a goal narrowly ruled out for offside.

Sunderland's Craig Gardner was sent off against his old side, who now sit five points above the bottom three.

It was also a frustrating afternoon for O'Neill on his return to the club he surprisingly quit in August 2010 after three consecutive sixth-place finishes.

Both Sunderland and Villa have now gone six games without a victory.

His Black Cats have now gone four games without scoring, although Bendtner's disallowed strike midway through the second half will be the game's main talking point.

O'Neill received a frosty reception from the Villa faithful but his return may also have left a few home fans misty-eyed about his largely successful reign.

The club's form has plummeted ever since he resigned and they are still in with a chance of being relegated this late in the season. Their next game is at home to second-from-bottom Bolton on Tuesday.

O'Neill's day almost got off to the worst possible start when Villa nearly went in front after just 12 seconds.

Gabriel Agbonlahor charged down goalkeeper Mignolet and the ball ricocheted to Weimann, but Mignolet recovered well to claw away the Austrian striker's goalbound lob.

Mignolet then did well to tip Charles N'Zogbia's 20-yard drive around the post as the hosts began with a verve belying their wretched home form, which has brought just one win in five months.

But Villa's bright start soon faded and they were fortunate to stay level when Bendtner headed over from two yards out after being teed up by James McClean's superb dinked cross.

After the break, Villa again came out of the blocks in lively fashion but it was Sunderland who created the next clear opening when McClean prodded over from six yards following Stephane Sessegnon's wicked cross.

The visitors grew in confidence and went close again when Stephen Ireland cleared off the line after Bendtner's effort looked certain to roll in.

Bendtner did hit the net moments later but his strike was disallowed for offside, with replays suggesting a very close call from the linesman.

Substitute Barry Bannan had one last chance to give Villa a much-needed victory but he blazed over, before Gardner was sent off for a second bookable offence after fouling Marc Albrighton in injury time.

"The boys had the chances to win it with just a bit more quality in the final third of the pitch.

"They gave everything they could and the young boys are playing out of their skins.

"We have got four games to go and we have got to try and take points in every game. We are capable of that with the spirit the boys are showing."

"I think the linesman has incorrectly called offside against Bendtner because level is on.

"It certainly was last week anyway and, unless they've changed the rules this morning, it still is now.

"He was so adamant he had got it right. I hope he watches it himself before he settles down to his supper. I'm sure he will."

O'Neill on getting a hostile reception at his former club:

"I think it's a very natural reaction considering I've been gone two years and they've never known my reasons for leaving. I was expecting it and I got it.

"I apologise maybe for leaving five days before the start of the season. The timing was not great but I think the team I left behind was infinitely better than the team I started with."