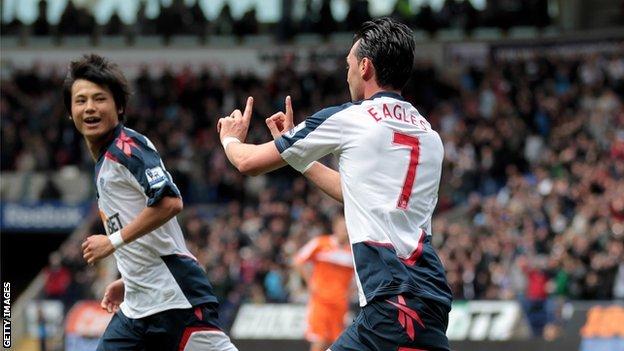 Chris Eagles rescued a point for relegation-threatened Bolton, who were given a stern test by Swansea.

Scott Sinclair gave the visitors a perfect start with a spectacular early opener, cutting in from the wing before unleashing an unstoppable curler.

Eagles soon had Bolton level as he arrived on cue to turn Martin Petrov's left-wing cross past Michel Vorm.

But Bolton were thankful for a series of Gretar Steinsson blocks, while the crossbar denied Swans' Danny Graham.

It took just six minutes for Swansea to take the lead with their first attack of the game.

Sinclair picked up the ball in space on the left wing, and cut in before unleashing a curling shot into the top corner beyond Adam Bogdan.

"Disappointment for Bolton manager Owen Coyle, but I think he knows that his team could easily have lost this game. Swansea were the better side here and Bolton in the end were hanging on for a point."

But Bolton, desperate for wins to maintain their Premier League status, responded with real character and soon levelled.

Petrov got away down the left wing before crossing for the arriving Eagles, who barely had to break stride as he side-footed into the Swansea net.

Gylfi Sigurdsson could have restored Swansea's advantage as he drove into the Bolton area, but Steinsson threw his body in the way to deflect the ball over the bar to safety.

Vorm then had to make an outstanding save to deny Petrov, diving low to his left to push away the Bulgarian's curled free-kick.

Bolton kept up the pressure and Kevin Davies saw his shot deflected just wide, but Swansea should have scored at the other end soon after.

Steven Caulker skied the ball over the bar with the goal at his mercy after Bogdan could only parry Sigurdsson's free-kick.

It was a bad few minutes for Caulker, as the on-loan Spurs defender got a stray knee to the head from his own keeper soon after in a goalmouth scramble. He was able to continue after treatment, however.

Sigurdsson opened up Bolton early in the second half with a slide-rule pass to Graham, but Bogdan read the danger and raced off his line to smother the Swansea striker's shot.

Graham again went close as the Bolton defence stood off the former Watford man, who curled a shot inches wide of the far right-hand post with Bogdan stranded.

Steinsson again came to Bolton's rescue when he nicked the ball off Sinclair at the back post, who looked set to score after Graham had rolled his marker to send in a dangerous low cross.

Bolton supporters were urging their team to attack in search of the points so badly needed for survival, but instead Swansea continued to turn the screw.

The Wanderers goal was living a charmed life as first Bogdan denied Sinclair with a sprawling save, before Swansea striker Graham left the crossbar shaking with a thunderous drive.

Bolton manager Owen Coyle brought on David Ngog for Ryo Miyaichi and the Frenchman's direct running up front helped to stretch Swansea out of their compact and organised shape.

Ivan Klasnic was also on for the home side and he teed up Eagles for a shot that whistled agonisingly wide of the Swansea goal, while Mark Davies was just beaten to an inviting cross by Caulker.

Those were Bolton's last and best chances of the second half and Blackburn's win at Norwich heaped further pressure on Coyle's side, whose trip to Aston Villa on Tuesday now takes on even greater significance.