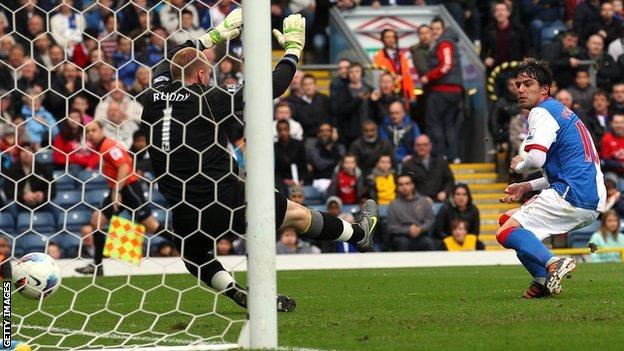 The Canadian's curling effort beat John Ruddy after the break, to seal victory and reverse a run of five defeats on the trot.

Mauro Formica had given Rovers the lead from Morten Gamst Pedersen's cross after a strong first half performance from the Canaries.

But off-target efforts from Aaron Wilbraham and Ryan Bennett were as close as they came to scoring.

Yakubu also hit a post before Blackburn took the lead and, although their status looked perilous heading into the match, victory gives Steve Kean's side a lift with a tough set of three games to come.

Blackburn travel to Tottenham and Chelsea, either side of a crucial home game against Wigan, so three points against Norwich was vital.

The victory lifted Rovers above Bolton and briefly level on points with QPR, although they went three points adrift of safety again after Rangers' 1-0 victory over Tottenham later on Saturday.

And though their fans were supportive throughout, there were constant reminders that relegation worries are outstripped by the ongoing concerns about the club's ownership.

Chants of "Steve Kean out" and [the club's owner's] "Venky's out" were more than a footnote of the club's state and supporters will cast an envious glance towards their opponents as the season comes to a finale.

Norwich actually started the game as though they were fighting Premier League relegation, such was their greater purpose and had justification to feel hard done by when they went in behind at the break.

With James Vaughan returning to the attack for his first action since February, Norwich packed the midfield in a diamond formation and their fluency and higher tempo gave them the upper edge.

Grant Holt headed wide and had a shot blocked, while Jonny Howson tested Paul Robinson with a long-range shot.

But for all their possession and clever movement, they left gaps on the flanks which Blackburn eventually exploited.

Scott Dann was beaten to a header which whistled past the post and Yakubu almost scored a scruffy bicycle kick when he clipped Pedersen's knockback from a Hoilett cross.

The Nigerian's effort was the cue for improvement, and two minutes later Rovers took an unexpected lead when Pedersen found Formica, who was unmarked at the back post.

Spurned on by their opener, Kean's side put further daylight between themselves and the visitors when Hoilett collected the ball on the left flank dribbled inside and unleashed a curling shot into the top corner.

And with Gael Givet back in the side, and looking commanding in defence after a reported fall out with the Rovers boss, his re-emergence will give Rovers hope they can avoid relegation.

Norwich boss Paul Lambert made changes on the hour mark and both substitute Wilbraham and Bennett were inches from scoring.

But, with 43 points, and clear of the relegation worries that still occupy Blackburn, they can bask in a season in which Rovers could have only hoped for.

"Today was about the quality of Morten Gamst Pedersen and Mauro Formica which paid off. There were six or seven candidates for man of the match with Gael Givet and Scott Dann being fantastic.

"Performances like this with commitment and application, there is no reason why we can't get a result at any ground."

"It was a tough game for us but we didn't get going. It's been a long season for us and we gave away two silly goals despite having a lot of the ball in the first half.

"I can't fault the effort but the performance wasn't there. It's not many times I've said that this season."