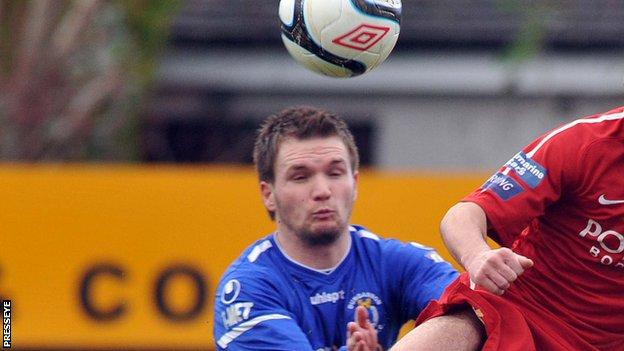 Gary Thompson volleyed the Whites ahead on 90 seconds and he then doubled Distillery's lead eight minutes later.

However after Gary Liggett hit the Swifts woodwork, Michael McKerr pulled a goal back on 29 minutes.

Ryan O'Neill levelled on 43 and after the Swifts had wasted chances, Ryan Harpur hit a last-gasp winner.

Distillery got off to the perfect start with Thompson hammering in the opening goal after 90 seconds.

Liggett went close to probably putting the match beyond Dungannon's reach as he lashed against the woodwork on 20 minutes.

However after their dismal opening, Dungannon were suddenly back in the game as McKerr fired past Billy Brennan on 29 minutes.

Stefan Lavery then thought he had snatched an equaliser for the Swifts but his header was disallowed.

However, Dungannon did get on terms two minutes before the interval as O'Neill poked home a Jonny Topley cross.

Not surprisingly, Dungannon came out fired up after the interval and went on to have the better of the second period.

Michael Ward missed a good chance for the home side as he failed to get full purchase on a header and Emmet Friars then nodded over another great opportunity.

It looked as though the Swifts would pay for those two missed chances but Harpur got on to the end of a free-kick in the second minute of injury-time to stab home the winner.

The Swifts remain in the relegation play-off position but they are only one point behind both Distillery and Glenavon.