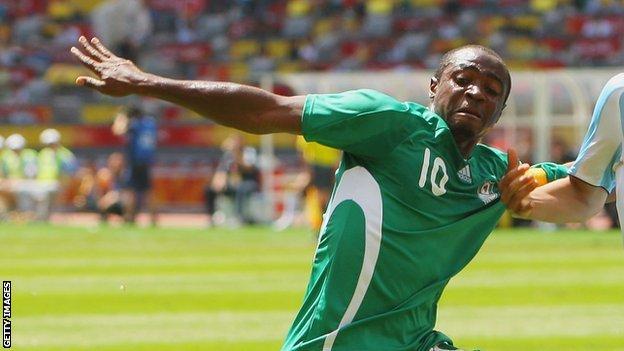 Nigerian Isaac Promise Isaac has sealed a move from relegated Turkish side Manisaspor to rivals Antalyaspor.

The 24-year-old striker has been in Turkey since 2005 and has signed a three-year contract with his new side.

"I'm very happy with this move. I think I have made the right choice and finally put to rest speculations over my future," Isaac told BBC Sport.

"I have a young family and their happiness was key in my decision making."

He was linked with several clubs in Turkey, France, Russia, China and the United Arab Emirates but puts happiness above money.

"Money was secondary, family and happiness means Antalyaspor was surely above others," he explained.

His journey in Turkey started at Genclerbirligi before a move to Trabzonspor in 2008.

After failing to settle in Trabzon he went on loan to Manisaspor the following season before making it a permanent deal six months later.

His final season at the club turned out to be his best, with eleven league goals.

Which was not enough to keep the club in the top flight but good enough to attract interest from Antalyaspor.

"It didn't end well for the club and their amazing fans but I can only wish them all the best in the future." he said.

"I thank everyone in Manisa for everything but now I need to focus on the new challenge with Antalyaspor."

Isaac who has represented Nigeria at the under-17, under-20 and under-23 levels is still awaiting his full international cap with the Super Eagles.

He was captain of the Nigeria teams that finished as runners-up at the 2005 Under-20 World Cup and the 2008 Beijing Olympics.