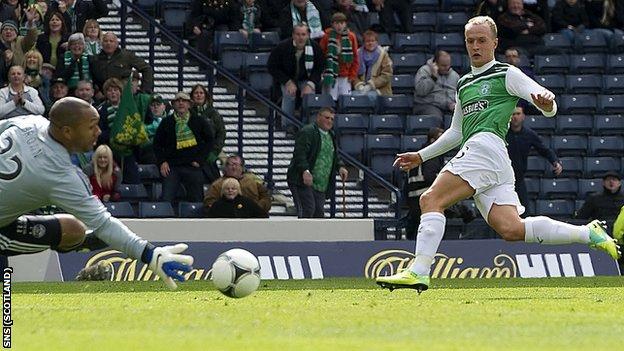 Hibernian manager Pat Fenlon praised the character of his side after they reached the Scottish Cup final.

The 2-1 semi-final victory over Aberdeen was achieved through goals by Garry O'Connor and Leigh Griffiths.

And Griffiths' winner came during a period when the Dons looked the more likely to score.

"We passed the ball a bit better and it was a great goal to win it. We showed a lot of character and guts to go and get a winner," Fenlon told BBC Scotland.

We've got to play better than we did today, whether it's Hearts or Celtic in the final

"We scored a very good goal initially and played well for the first 45 minutes and then went into our shell a little bit. The break probably came at the wrong time for us.

"Aberdeen put us under a lot of pressure, scored a fantastic goal, the equaliser.

"It was at that stage of the game where we were under a bit of pressure and Aberdeen were playing well.

"That's at the stage of the game where you've got to be tough and make sure you don't concede again.

"We scrapped away. Then we got a little bit of a foothold."

Fenlon has overseen a gradual improvement since taking over at Hibs in November, with the Leith side now seven points clear of the Scottish Premier League relegation spot and heading back to Hampden next month for the Cup final.

"I'm chuffed," said Fenlon. "I'm thrilled for everybody in the club; supporters, board of directors, players, everybody.

"I'm only here a short period of time so it's fantastic for them. They've had a couple of bad seasons and we're trying to lift the club and lift it forward.

"We had 14,000-15,000 supporters enjoying themselves. It's fabulous to see. They haven't had loads of days over the last couple of seasons to celebrate."

Hibs will return to the national stadium on 19 May to face either Celtic or Hearts, who face each other in Sunday's semi-final.

Asked if he could end Hibs' 110-year wait to win the Scottish Cup, Fenlon added: "We're here five months and we've got to the final at first go, so you never know.

"I don't care who we get. They're two good teams, two great clubs and it's a Scottish Cup final.

"I've been to a fair few of them, they're great occasions and we look forward to it no matter who it is.

"We've got to play better than we did today, whether it's Hearts or Celtic, we've got to make sure that we perform a little bit better with the ball than we did.

"The character and the work-rate was all there, we've got to be a little bit more comfortable on the ball and the fact that we've got to the final might help the players relax as well."