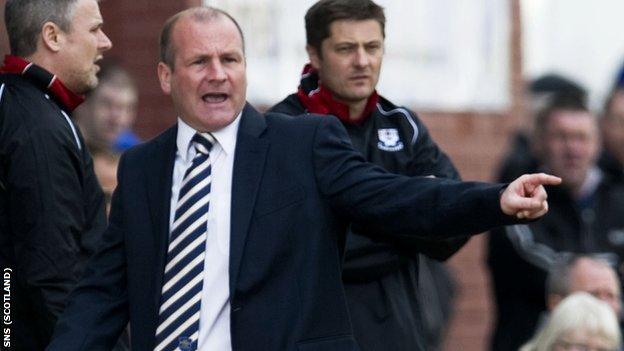 Queen of the South manager Gus MacPherson says he and assistant Andy Millen will not resign their posts amid speculation of a club takeover.

But MacPherson said: "Under no circumstances will we resign."

Hope said on Friday: "Gus MacPherson and Andy Millen are the current managers and commenting on that would be rather rude.

"However, I do believe the consortium would, if Gus and Andy resign at the end of the season or their contracts are not renewed, prefer Andy Bollan with Andy Goram as his assistant."

Speaking after the 0-0 draw with Falkirk which leaves Queens three points adrift at the bottom of the Scottish First Division, MacPherson responded to news of the takeover bid.

"The dressing room was extremely quiet before the game," he added.

"Individuals have been quoted on the BBC and mentioning other employees that they would like to bring to the club, mentioning my contract, Andy Millen's contract if we were to resign.

"There's very few people that know about my contract situation at Queen of the South.

"I don't believe leaking a story 24 hours before an important home game is the right thing to do but other people have their own agendas and they would have to explain that.

"It would be fantastic for Queen of the South if there was an investment put into the club. It has to be done through the proper channels."

Meanwhile, BBC Scotland understands any group bidding to take control of Queens would need to buy out more than just Rae's stake in the club as the chairman is not a majority shareholder.