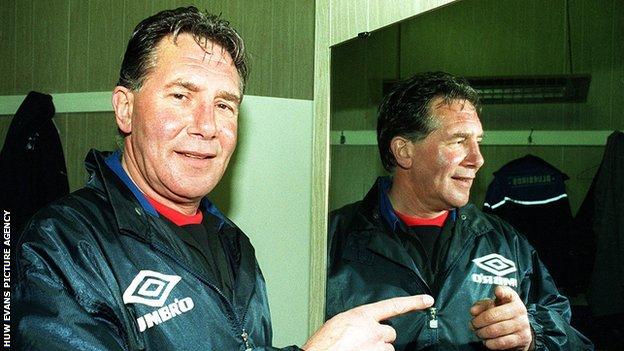 Former Cardiff City manager Eddie May has died at the age of 68.

May managed the Bluebirds for almost four years in which they won the 1992-93 Division Three title.

Cardiff also won the Welsh Cup that season with a 5-0 win over Rhyl and went on to beat Manchester City 1-0 in the FA Cup in 1994.

May also managed Newport County, Torquay United, Brentford and Highlanders in Zimbabwe as well as spells in Kenya, Uganda, Malawi and South Africa.

In a statement on Cardiff City's official website chief executive Alan Whiteley said: "On behalf of everyone at the club I would like to pass on our sincere condolences to Eddie May's family at this sad time.

"We will be honoured this week to collectively show our respects and appreciation to a man who will forever and rightly be remembered as an integral part of modern Cardiff City history.

"He will be sadly missed by all."

He made more than 300 appearances for Wrexham after joining the north Wales club from Southend in 1968.

During an eight year spell at the Racecourse he was a member of the side which won promotion from the Fourth Division in 1970 and a Welsh Cup winner two years later.

He skippered the side to the European Cup Winners' Cup quarter-final in 1976 before they lost to Anderlecht.

In a statement Wrexham said: "The club is deeply saddened to hear of Eddie's passing and we can only send our sincere condolences to his family and friends at such a distressing time."

May left Wrexham to join Swansea in 1976 and he finished his playing career at the Vetch before moving into coaching.

His coaching career included spells in Saudia Arabia, Kenya, Finland, the Republic of Ireland and Zimbabwe and he also managed Barry Town, Llanelli and Haverfordwest County in Wales.

In conjunction with the family's wishes there will be a tribute to May before Cardiff's home game with Leeds next Saturday while the players will wear black armbands in the match against Derby County on Tuesday.