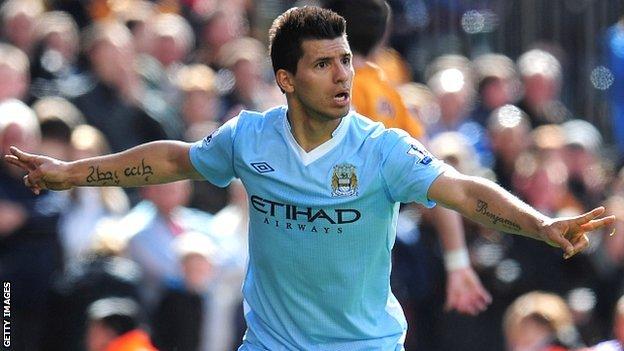 Both sides had early chances before City took control and Aguero slid them ahead from Gael Clichy's superb cross.

Joe Hart made an excellent save to deny Steven Fletcher as Wolves worked hard to level, but Nasri slotted in to earn his side a vital win in the title race.

If City beat United at home on 30 April they will be top with two games left.

Their goal difference is six superior to that of their local rivals and all eyes will now be on that meeting at Etihad Stadium.

City spent much of the season in top spot but their defeat at Arsenal on 8 April left them eight points behind United with six games remaining.

Suddenly, though, they are very much back in contention and it promises to be a thrilling end to the campaign.

The same can not be said for Wolves, who drop into the Championship after three years in the top flight.

Terry Connor's side have lost a club-record nine successive home games and are without a win of any description since 4 February.

They needed little motivating for a match of this magnitude and produced a spirited display but City, buoyed by news of United's 4-4 draw against Everton earlier on Sunday, ground out a professional win.

Carlos Tevez fired just over the bar after only 17 seconds and at the other end Sebastien Bassong's shot was deflected narrowly wide.

Aguero then drilled across the face of goal before David Davis forced Hart into a fine save with a powerful effort from 18 yards.

Zabaleta and David Silva combined well on the right to slip Nasri through on goal, but the Frenchman dragged wide of the far post.

Aguero was again off-target on 20 minutes but there would be no mistake at the end of his side's next foray forward.

Clichy nutmegged Michael Kightly before curling a delightful low pass to Aguero, who kept his footing to stab a finish past Dorus de Vries.

Wolves deserve credit for their positive response and it took a superb diving save from Hart to repel Fletcher's header shortly after half-time.

City had now lost their earlier rhythm, they were misplacing passes and Mancini introduced Nigel de Jong for Silva.

It may not have been an attacking move but City actually looked more composed with De Jong on the field, and they duly ended the contest.

Tevez took a quick free-kick, squared for Nasri and he benefited from Bassong pulling a hamstring to coolly slot past De Vries.

Wolves were furious with referee Lee Probert's decision to penalise Davis for his challenge on Tevez, but their protests were in vain.