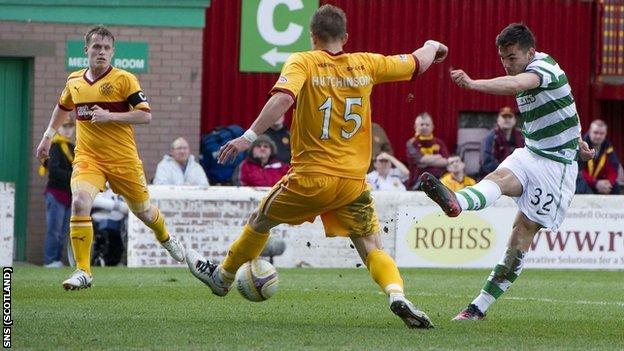 Celtic's Pawel Brozek fired wide and had another effort saved while 'Well's Chris Humphrey was twice denied by Lukasz Zaluska during the first half.

Watt volleyed the visitors ahead on 63 minutes and quickly struck his second.

Motherwell were unable to rally and Cha Du-Ri headed a third for Celtic seven minutes from the end.

Stuart McCall's side are now just three points ahead of fourth-place Dundee United with four games to play.

Rangers' vastly superior goal difference means they are now just a point away from sealing the runners-up spot but the Ibrox side are unlikely to be eligible for European football next season, which would give the team finishing third a Champions League qualifying berth with Celtic.

The visitors made the early running with Kris Commons, Brozek and Victor Wanyama all unable to hit the target.

Motherwell's first real chance came midway through the first half when the pacy Humphrey got in behind Emilio Izaguirre and hammered a volley towards goal that was beaten away by Zaluska.

And the Celtic stand-in keeper soon denied Humphrey again after the winger had struck a low drive from outside the area.

Wanyama's driving run and pass opened up space for Brozek on the edge of the Motherwell box but, with the goal at his mercy, the on-loan Trabzonspor striker stabbed his shot wide.

Omar Daley fired into the arms of Zaluska and, at the other end, Commons flashed another shot wide following another forceful run by Wanyama.

And Celtic had one more chance before the break as Brozek burst into the box off Commons' pass and forced keeper Darren Randolph to save with his feet.

Paddy McCourt, who had replaced the injured Ki Sung-Yueng before the interval, opened up the home defence with a superb splitting pass but Cha's hesitant pass was easily gathered by Randolph, the full-back left to rue his decision not to shoot.

Youngster Watt was introduced for Brozek and quickly broke the deadlock.

Wanyama's back-post cross found the striker at a tight angle but he connected powerfully with the outside of his boot and Randolph could not stop it crossing the line.

And, within three minutes, Watt had doubled his tally, firing across Randolph into the net after being found by Joe Ledley.

Cha completed the scoring when he met McCourt's deep cross with a powerful header, Randolph only able to get a touch on the ball as it flew past him.