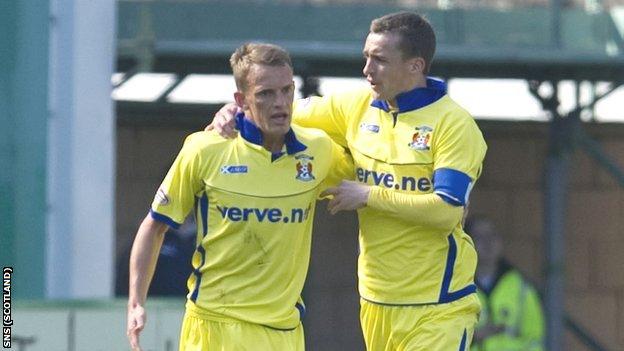 Hibernian were unable to further distance themselves from relegation as they lost at home to Kilmarnock, whose win came from a Dean Shiels penalty.

The three points for Killie means they leapfrog Aberdeen into seventh spot.

Dunfermline, the Scottish Premier League's basement side, earned a point from their 4-4 draw at St Mirren on Saturday, reducing the gap on Hibs to six.

But Pat Fenlon's side were poor against the Ayrshiremen, especially in the second half, and seldom truly threatened Cammy Bell's goal.

Hibs fans will look for a big improvement for the Scottish Cup final against Hearts in May.

Killie's sole aim in the remaining games is to finish the "best of the rest" and they look a reasonable bet to hold on to that seventh spot after their win at Easter Road.

Manager Kenny Shiels made four changes to his team that lost 6-0 to Celtic on 7 April - Lewis Toshney, Ryan O'Leary, James Dayton and Danny Racchi returning in the away team's yellow shirts.

Hampden semi-final hero Griffiths attempted to go by Michael Nelson on the edge of the area after nine minutes but went to ground and was booked for diving by referee Craig Thomson.

Griffiths was allowed space to shoot from 25 yards, and forced Bell to turn the ball over the bar, then an O'Connor header from a corner hit team-mate James McPake inside the six-yard box and the visitors scrambled clear.

A fierce Isaiah Osbourne shot appeared to hit a sprawling James Fowler on the arm 20 yards out but nothing was given as Hibs went forward once more.

Close to half-time, Kelly was felled in the box and Thomson had no hesitation in pointing to the spot. Shiels made no mistake from 12 yards.

After the break, Roy O'Donovan came on for O'Connor when the big striker went off with a foot injury and he was joined by Danny Racchi who was stretchered off after a Claros tackle.

Killie's Dayton mis-hit a clearance from a corner on to his own arm inside the area and the ball fell for Claros, whose effort was narrowly off target.

Bell held a 30-yard free-kick from Griffiths as Hibs again failed to find a way through and their dismal record of one home win all season remains.