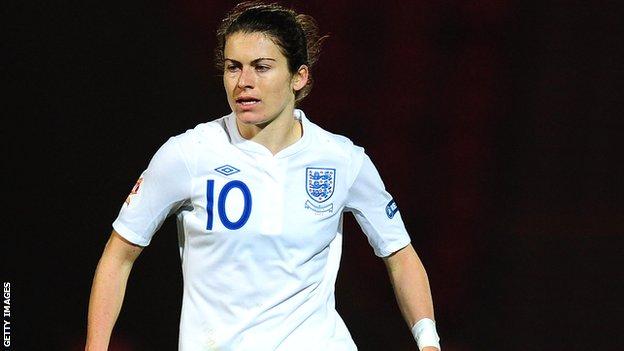 Alex Culvin's sending-off made her the third Bristol player in seven days to see red after Grace McCatty and Corinne Yorston were dismissed last weekend.

In the first FA Cup final in the club's history, Blues will play Arsenal or Chelsea, who meet later this month.

In the Premier League, Leeds are two points clear after beating Cardiff 2-0.

The leaders have now finished their fixtures while second in the table Sunderland - who drew 0-0 at Aston Villa - have two games remaining.

Bristol were reduced to 10 players three minutes later when Culvin used her hands to prevent winger Carney's corner looping into the net.

Williams sent the penalty hopelessly wide but made amends with the 39th-minute pass from which Carney swept in her first goal.

Carney doubled her tally a minute before half-time, volleying a close range shot into the roof of the net from striker Jodie Taylor's cross.

Academy almost reduced the arrears in the 64th minute, when striker Laura Del Rio's 20-yard drive was pushed over the bar by substitute goalkeeper Marie Hourihan.

But any hopes of an unlikely fightback were ended when Williams headed her second goal of the game from right-back Chelsea Weston's cross.

Spanish international Del Rio did grab a consolation goal, however, jinking her way through the defence to score with a low cross-shot nine minutes from time.

Victory would have all but clinched the title for Sunderland, but they had to settle for a point from an evenly fought contest.

Either side of half-time, Villa goalkeeper Megan Walsh pulled off superb saves to deny Rachel Burnette and Jordan Atkinson goals.

But Villa went closest to scoring when Kelly Clarke rattled the crossbar midway through the second half.

Cardiff slipped to defeat after having defender Amy Lea sent off for a 38th-minute foul on Billie Murphy.

Carey Huegett struck goals in the 55th and 73rd minutes to end Leeds' league season on a winning note.

Watford came from a goal behind to claim a victory that lifted them off the bottom of the table and could save them from relegation.

Suzanne Davies shot Forest in front in the 34th minute, but Sarah Wiltshire equalised direct from a 25-yard free-kick 13 minutes into the second half.

The result left Forest bottom and needing to win their final match, against Coventry City, to stay up.