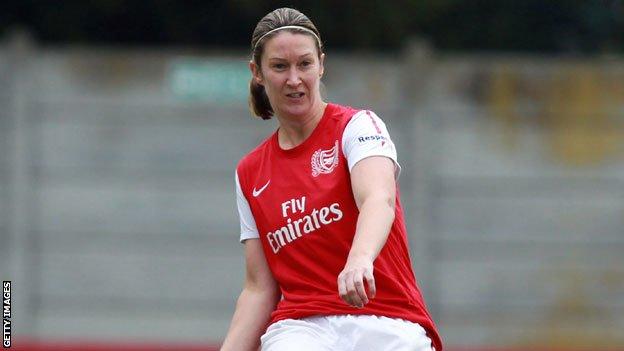 Arsenal face a tough task to reach the Women's Champions League final after Kerstin Garefrekes hit a stoppage time goal to give Frankfurt a 2-1 away win in the semi-final's first leg.

The Gunners edged the first half in Borehamwood but Frankfurt led when Ana Maria Crnogorcevic shot home from Dzenifer Marozsan's 64th minute pass.

But Garefrekes snatched the winner from close range with moments left.

Arsenal, who lost to Olympic Lyonnais in last season's semi-final, will be clear underdogs when they take on the three-time European champions in next Saturday's second leg in Frankfurt.

Manager Laura Harvey said: "Conceding a goal so late was a real killer after we'd been the better side throughout.

"We should have been in front before half-time, and even after they scored their first goal I felt we could still win the game.

"But we lost concentration for a moment to give away the second goal, which came so late that there was no time to hit back.

"It's left us with a very difficult job in Germany next week, but we've got to go there believing we can turn the tie around and I really think we can go through."

In a game of few chances midfielder Jayne Ludlow wasted Arsenal's best opening of the first half, shooting wide from a good position in the ninth minute.

Midfielder Houghton and striker Ellen White both went close, too, but Frankfurt scored when Crnogorcevic slotted in.

Arsenal were back on level terms five minutes later, however, defender Grant heading in at the back post.

In the closing stages the Gunners pressed as they looked to head into the second leg with a lead.

But it was the visitors who snatched a vital second goal three minutes into stoppage time, Garefrekes collecting a Svenja Huth cross to net the winner from close range.